Plants featured in our color series, “Over and Under the Rainbow.” Photos: Daniel Mount

I like to say I’m a “horticolorist.” Color makes my heart sing. And nowhere more so than in the garden where hues vibrate and morph with the season, the hour of the day—even moment to moment. Like plants, color is a living thing that relies on light. Its interpretation is singular, uniquely personal; who hasn’t played the game of wondering if what I see as “red” is the same effect that you see and identify as “red.” Or is that just me?

“Over and Under the Rainbow”is a series of color stories contributed by PNW gardener and writer Daniel Mount. As we approach the Solstice and celebrate Pride, we’re reveling in glorious color and honoring diversity. Many garden designers caution against using red. English garden designer and writer Mary Keen warns, “Red… like all stimulants, needs to be handled carefully and treated with respect.” Even the adventurous gardener Christopher Lloyd complains “Large blocks of undiluted red are a mistake; as indigestible as swallowing a lump of uncooked dough.” Floral designer Malcolm Hillier calls red “A blunt jab in the ribs.” Orange is extravagant, outrageous, and modern.

With orange, the most primary of the secondary colors (in my opinion), I begin the second half of our sojourn through color. Orange, the marriage of red and yellow, maintains both the primal force of red and the happy-go-lucky, child-like brightness of yellow. 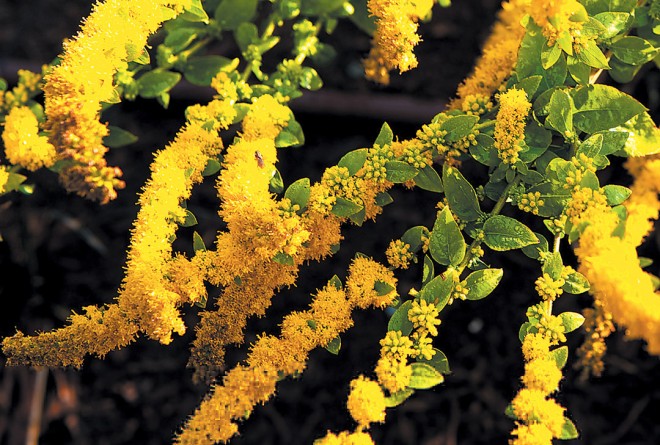 I often garden like Van Gogh painted, filling borders with golden grasses, acidic hostas, and chlorophyll- starved conifers. I fantasize about an all-yellow garden, but have never dared to make one. There is something a bit frightening about  yellow. It can be prissy as a little girl’s ruffled Easter dress, pissy in dull shades like mustard or ecru, or high-pitched and screeching in bright tints of citrine and buttercup. Yellow can trump the preciousness of oh-so-rare blue, and if not used properly, dims its complement, violet. June is the greenest month, at least here in the Evergreen State. So when Theo repeated herself, “It’s so green,” pitching her voice higher and raising the volume, singing actually, it was hard not to agree.

Theo taught me to write, or at least gave me the kick in the butt— albeit a tender kick—I needed to get rolling over the page with a pen. Rarely short of words, she is ripe with story. So when she repeated for the third time, “It’s so green,” even higher, even louder, I had to laugh.

In delight, of course. When I talk of blue, you realize, I mean true primary blue, or those blues diluted with white or fortified with black, not the blues tainted with pink, or lit up with yellow. I list turquoise and periwinkle among my favorite colors, but consider neither blue. True blue, so rare in nature, finds its most glorious expression in flowers: forget-me-nots, sages, and gentians.

My, how we love blue flowers. You might believe the marriage of sexy red with faithful blue would create a perfectly harmonious color. But violet seems to me a more violent clash of bloody red and bruised blue, passive and aggressive. Vibrating in these two fields gives violet a visual nap, sumptuous as velvet, turbulent as unsettled seas. Of all the colors, it is the one that befuddles me the most.

And nothing is more befuddling about this color than its nomenclature.