Layers of gauzy texture and soft color create a sense of spaciousness in a small planting bed.  Design and photo: Maggie Lee

In October of 2000, I flew to Paris and drove southwest to Chateau de Courson for the Journees des Plantes plant fair. Established in 1983, the event was a showcase for nurseries introducing new plants and varieties, offering them for sale in a lovely, park-like setting.

Dutch plantsman and designer Piet Oudolf was a featured speaker that year. It was thrilling to meet him; he had a grand stature, a warm presence, and a generous spirit. Listening to his presentation, one of his remarks nested in me, “Create the spontaneous feeling of plants in Nature … re-create the emotion.” As I listened to Piet speak and viewed his slides, his artistry and knowledge of plants and pollinators resonated deeply with me.

Piet worked as a garden designer for six years in coastal Holland before moving inland in 1981 to the quiet village of Hummelo with his wife Anja and their two sons. There, on three acres, they established their nursery and began collecting, growing, and experimenting with plants. They preferred flower shapes with strong form and structure, and resilient, long-flowering perennials that retained a wild character. Their collection was a departure from the more traditional ornamental plantings found throughout European gardens during the time. Grasses, the foundation of many wild plant communities, were a key plant group in their selections.

In 1983, on the last weekend in August, the Oudolfs held their first Open Day plant sale at Hummelo. By 1997, the annual sales became known as Grass Days. From this early phase of observing and learning “what these plants do,” the Oudolfs developed an innovative palette of herbaceous perennials and grasses with a sculptural presence, which soon became a distinctive feature in Piet’s designs for prairie-style meadows.

As a contemporary garden designer, Piet is a pioneering modernist. From his European roots comes a respect for structure and architectural details, formality, and a sophisticated plant palette. In 1995, Roy Strong, an English art critic and gardener in the classic formal style, remarked, “Piet added a novel twist to something familiar.” I love Strong’s use of the phrase “wonky baroque” in describing Piet’s approach to formal plant shaping. His use of asymmetrical structural forms, like the rhythmic syncopation of staggered blocks of yew and beech in the landscape at Hummelo, lead the eye from one side of the garden to the other, echoing the surrounding landscape and lending contrast and mystery to the environment. 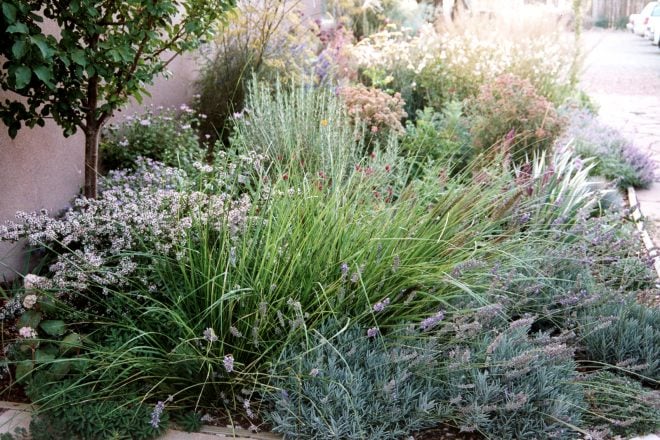 A densely planted matrix of color and texture, inspired by nature.  Design and photo: Maggie Lee

While researching plants for Chicago’s Lurie Garden, Piet fell in love with American prairie flora after a 2002 visit to Schulenberg Prairie in DuPage County, Illinois with Roy Diblik, a prairie specialist. Influenced by the prairies, Piet’s emerging planting technique subtly mirrored patterns found in the natural mixing of species in wild plant communities. Using a diverse palette of plants that romanced pollinators and invited wildlife, he planted in drifts, using broad strokes of plants with contrasting shapes to anchor his compositions. An example is his use of Asclepias incarnata and Echinacea pallida, plants with strong structure and good character that remain expressive from full flower to seed head for additional autumn and winter interest. Smaller clumps of plants loosely woven into the composition provide more intricate patterning. Intermingling scatter plants in groups of five or seven lend rhythm, complexity, and depth, while emerging accents of breezy grasses and perennials serve to soften and unify plantings.

Piet’s signature style reflects his intuitive artistry at designing spontaneity, an artful randomness. His plantings are dynamic living processes that change with the rhythm of the seasons. Familiarity and knowledge of the cultural habits of plants facilitates his profound designs. As does the value he places on timely and knowledgeable maintenance to ensure the integrity and continuity of the design. Natural changes, editing, and spontaneity are embraced as the gardens evolve.

The success of the lush meadow plantings in the Lurie Garden sparked international interest for nature-driven, wildlife-friendly urban landscapes. 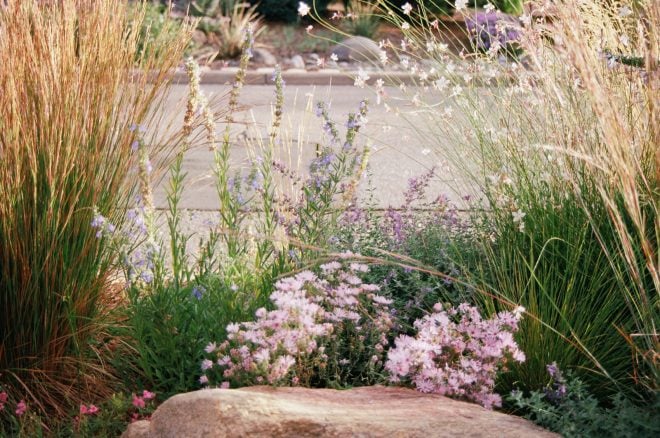 Santa Fe, where I live, is perched on a high plains plateau with wide-open views and nestled against the foothills of the Sangre de Cristo Range. As the sun lowers and sunset comes, the fabled light of the region deepens the colors of the mountains to rich, earthy tones of mauve-cocoa, copper, and plum.

The signature plants of this place, a palette of olive-green, sage, straw, and sienna, accent the form and finer textures of the terrain. The character of the land is complemented by the saturated blueness of the spacious skies. Animated, mercurial clouds luminously reflect Earth’s beauty and intrinsic partnerships within the environment.

As a design team, our challenge is to echo and emulate this unique scale and ambience throughout our gardens. We strive for a transition from the natural landscape to the garden that is harmonious, yet features memorable accents of surprise and spontaneity. As I studied and experimented with Piet’s design matrix, planting methods, and plant palette, the question emerged—how could I demonstrate his New Wave Naturalism regionally, here in the West?

Given the intense light of the Southwest, I’m drawn to using sumptuous, saturated colors like plum, wine, and burnished claret against a bronze backdrop. I study wild plant associations for color cues and subtleties, looking for related or complementary hues, and warm and cool motifs. The light also contributes ephemeral qualities to the garden: drama, transparency, high contrast, or soft subtlety. The movement of wind through plants lends dynamism and agility to the garden, as in waves of flowing grasses. Moving air also spreads fragrance and contributes to creating an atmosphere that is calming or energizing, and of course cooling.

Our foundation in creating these landscapes is grounded in cultivation practices optimized by incorporating biodynamic compost to improve the receptive capacity of the soil. The principles integral to building compost using biodynamic methods produces material that is more thoroughly digested, which in turn influences the formation of stabilized humus and the capacity of organic matter in the ripened compost to store nutrients and moisture. This beneficial compost strengthens life forces in the soil, stimulating root growth and microorganism production.

Immersed in the scale of many of Piet’s public garden commissions, it is possible to become engaged in an exhilarating dream-like freedom, surrounded by a verdant place of great beauty, only to emerge refreshed and recalling other native wild places. As my friend John Lash reminds me, “the memory of beauty endures.”

Gardens of the High Line: Elevating the Nature of Modern Landscapes, by Piet Oudolf and Rick Darke, Timber Press, 2017

Hummelo: A Journey Through a Plantsman’s Life, by Piet Oudolf and Noel Kingsbury, The Monacelli Press, 2015