Tundra Beavers, Quaking Bogs, and the Improbable World of Peat 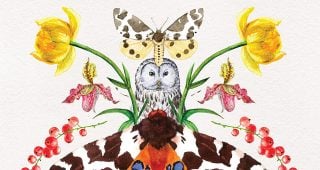 There is a gobsmacking fact early on in the new book Swamplands: Tundra Beavers, Quaking Bogs, and the Improbable World of Peat. Author Edward Struzik points out that while places like the Amazon rainforest are frequently singled out for sequestering carbon, peatlands sequester 0.37 gigatons of carbon a year. To put that number in perspective, that means 30 percent of land-based carbon is locked in peatlands, much more than all other vegetation types in the world combined. Of course, when peatlands are drained and destroyed, they release carbon dioxide into the atmosphere, and worse, the dried peat becomes fuel for fires that can smolder for years. In light of the last year we’ve had on the West Coast, learning about the systemic destruction of these natural landscapes can sound like reading a horror story with the outcome still unwritten. But this book is no downer. Rather, it is a fascinating and frank read that takes us through the lore and science of swamplands and even offers some avenues of restoration.

Author Struzik, who has led an enviable life as an environmental reporter and adventurer, takes the reader through bogs, fens, peatlands and swamps from the Arctic to the highlands of Hawaii and the tropical peatlands of central Africa. Along the way, the narrative describes how Indigenous communities understand these spaces, and why colonizing farmers and later industrialists destroyed these same places. This specific bit of American history may be new to many readers. Most fascinating to me was the systemic destruction of the Great Dismal Swamp—a project that started with the Jamestown settlers and continues to this day.

At the time of the colonization of America, the popular belief was that these spaces were at best useless and at worst haunted and full of “miasma,” an erroneous precursor to germ theory that posited that scourges like typhoid and cholera were caused by decaying matter in swamps. It didn’t help that the Great Dismal was super creepy, full of snakes, alligators, and skeletal white trees reaching out of tea-colored peat water.

As the author travels to Kauai to visit the nearly inaccessible mountain peatlands there, he meets with botanists who are still discovering new plants in these boggy outposts. Readers will no doubt find the stories of rare plant discovery and later attempts to propagate them fascinating.

The travelogue portion of this book—dipping into remote peatlands across the world—can give the reader some much-needed escapism as we enter our second winter of the COVID-19 pandemic. This book also gave me an idea for a safely socially distanced peatland-based road trip. The author singled out Ash Meadows National Wildlife Refuge on the Nevada-California border in Death Valley as a relatively local spot to view a rare desert peatland. The waters here still bubble up from underground aquifers left over from the last ice age, putting all our current problems into stark perspective. Here you can see 26 species of plants and animals found nowhere else in the world. It sounds like a wonderful spot to take in the lessons of this book far from the crowds this winter.