Over the last several years, a California native succulent has increasingly made headlines as the subject of several high-profile plant poaching cases. Clinging to coastal California cliffsides, the rosette-forming dudleya has weathered wind and rocky soils for eons but many of its wild populations are too fragile for commercial harvest. As succulent design trends have skyrocketed nationally and internationally, there has been an alarming increase in the large-scale harvest of these endangered native succulents from California wildlands. 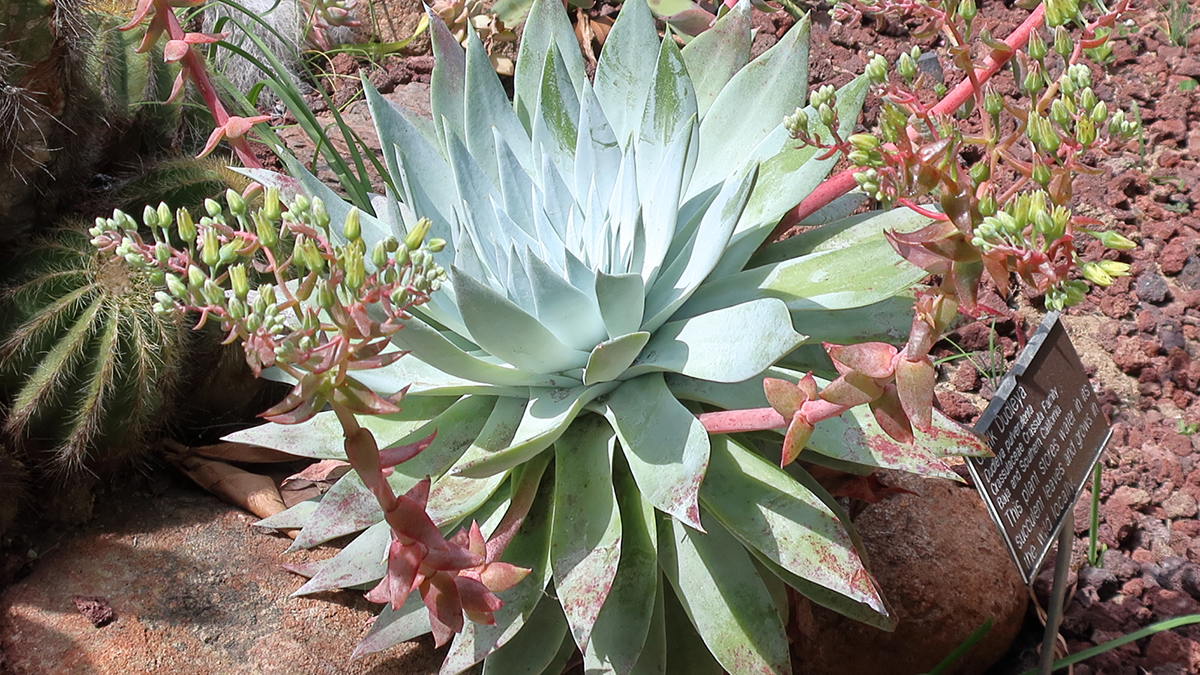 California Native Plant Society’s Conservation Program Director Nick Jensen fears that recent busts are just the tip of the iceberg. “The pressure from illegal harvest could place some of our state’s rarest species on the road toward extinction. Plants are being sold internationally via social media and online marketplaces are filled with mature dudleya specimens that were likely taken from the wild,” he notes.

But there is hope. In September, California Governor Gavin Newsom signed new legislation to specifically address dudleya poaching, making it illegal to remove dudleyas from state and private lands. Authored by California State Assembly member Chris Ward, AB 223 is part of an effort to stop this rampant poaching. 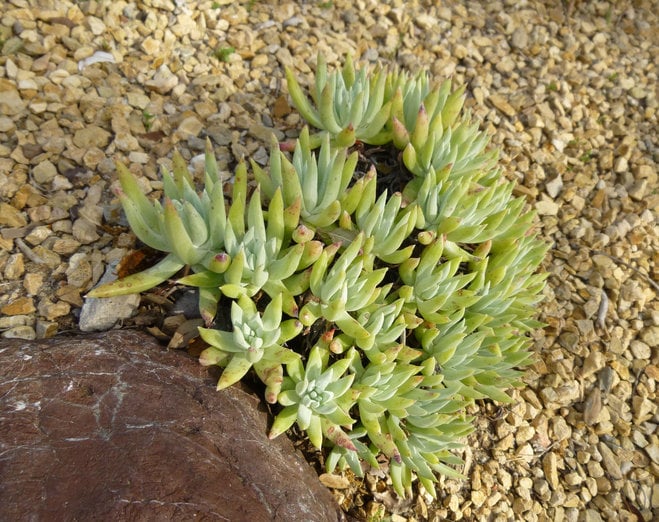 And dudleyas do need protecting. Of the 47 dudleya species, 26 grow along California’s cliffs and of those, more than half are ranked as rare. Ten species from this group are classified as threatened or endangered under either the Federal or California Endangered Species Act. However, conserving wild dudleya does not need to be at odds with celebrating this California succulent in our gardens. Local nurseries along the West Coast offer ethically sourced dudleyas that make an attractive addition to any succulent garden.

One of the most notable features of some dudleya is their waxy coating called farina. Numerous species display an epicuticular wax on their leaves. This waxy coating is usually white and chalky, leading to common names such as chalk dudleya (D. pulverulenta) and powdery liveforever (D. farinosa). The wax on the giant chalk dudleya (D. brittonii) creates a surface with some of the highest ultraviolet reflectivity ever discovered in plants. Other species, such as sticky liveforever (D. viscida), have a clear, sticky coating. This adhesive layer helps to protect its leaves from the sun, in much the same way as those with farina. It accomplishes this solar protection by gathering dust and debris, thus blocking solar radiation.

Dudleya flowers are a favorite nectar source for local hummingbirds and species with yellow flowers are also known to attract bees, making this genus a valuable addition to a pollinator garden.

Liveforever (Dudleya albiflora)
This rosette-forming species features “fingers” of exquisite milky chartreuse. A petite form, it tops out at a modest 4” high and 6” wide. The fleshy pearlescent leaves seem to glow in the light and have tiny red tips. These plants may be solitary or divide into clumps of up to a dozen rosettes. In early summer, small, white, urn-shaped flowers sit atop red stalks. This species is ideal for a container, where its petite charms can be best appreciated. Found on the Baja Peninsula and on the islands of Cedros, Magdalena, Partida, and Espiritu Santo. Hardy to 25°F.

Giant chalk dudleya (Dudleya brittonii)
In many ways, giant chalk dudleya is the classic liveforever, with 18” rosettes of chalky-white spoon-shaped leaves surrounding a thick basal stem. Strikingly white new leaves at the center eventually age to a silvery green as they become outer leaves. This slow, clump-forming succulent sends up stout, silvery-white 1–2’ high flower spikes in late spring. These spikes arch upward and blush red as the clusters of stiff tubular yellow flowers open in succession, older to newer. It makes an ideal addition to a dry garden bed. It is endemic to the Pacific coastal areas of Baja between Tijuana and Ensenada. Hardy to 15°F. 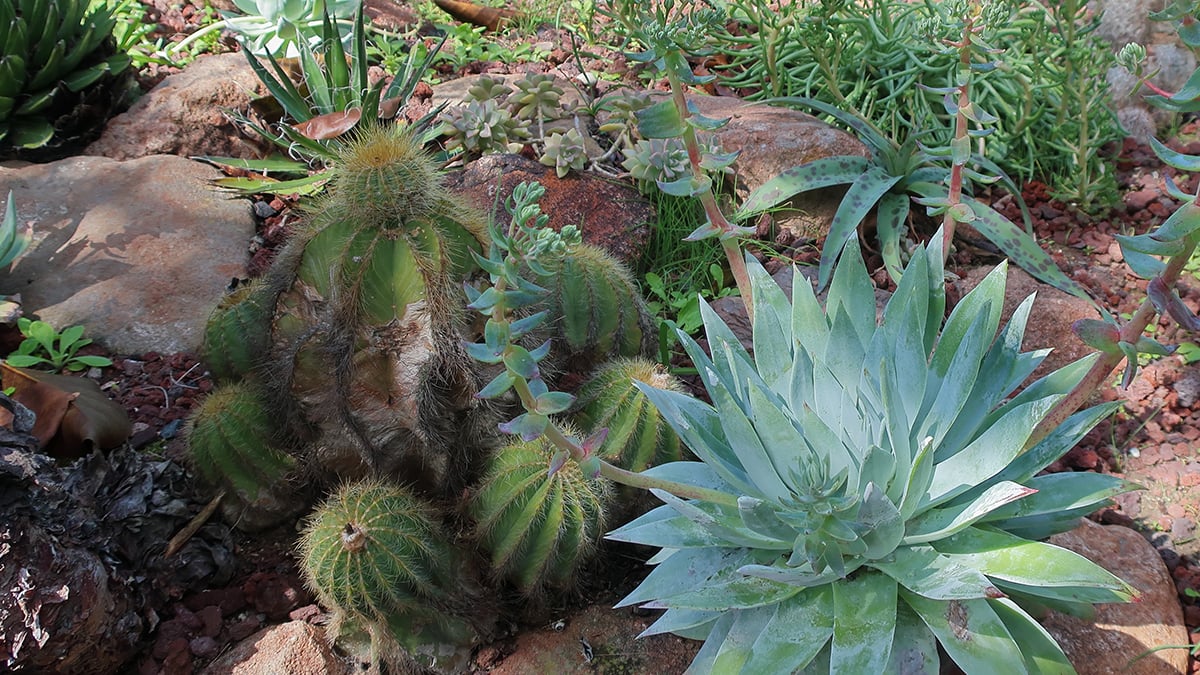 Coast dudleya (Dudleya caespitosa)
Coast dudleya is commonly found on coastal bluffs from North Los Angeles County up to the Monterey area. It manages to survive poor growing conditions, dealing with wind and poor soil alike. One of the “finger” liveforevers, this petite charmer displays silvery-green upward-facing leaves that tend to grow at all angles. Topping out at 6” tall and 6–10” wide, come spring it sends up 12” tall spikes of bright yellow tubular flowers tipped in red. Very drought tolerant but a bit frost tender, this species can be grown in a decorative container and, if need be, brought inside on the coldest nights. Hardy to 30°F. 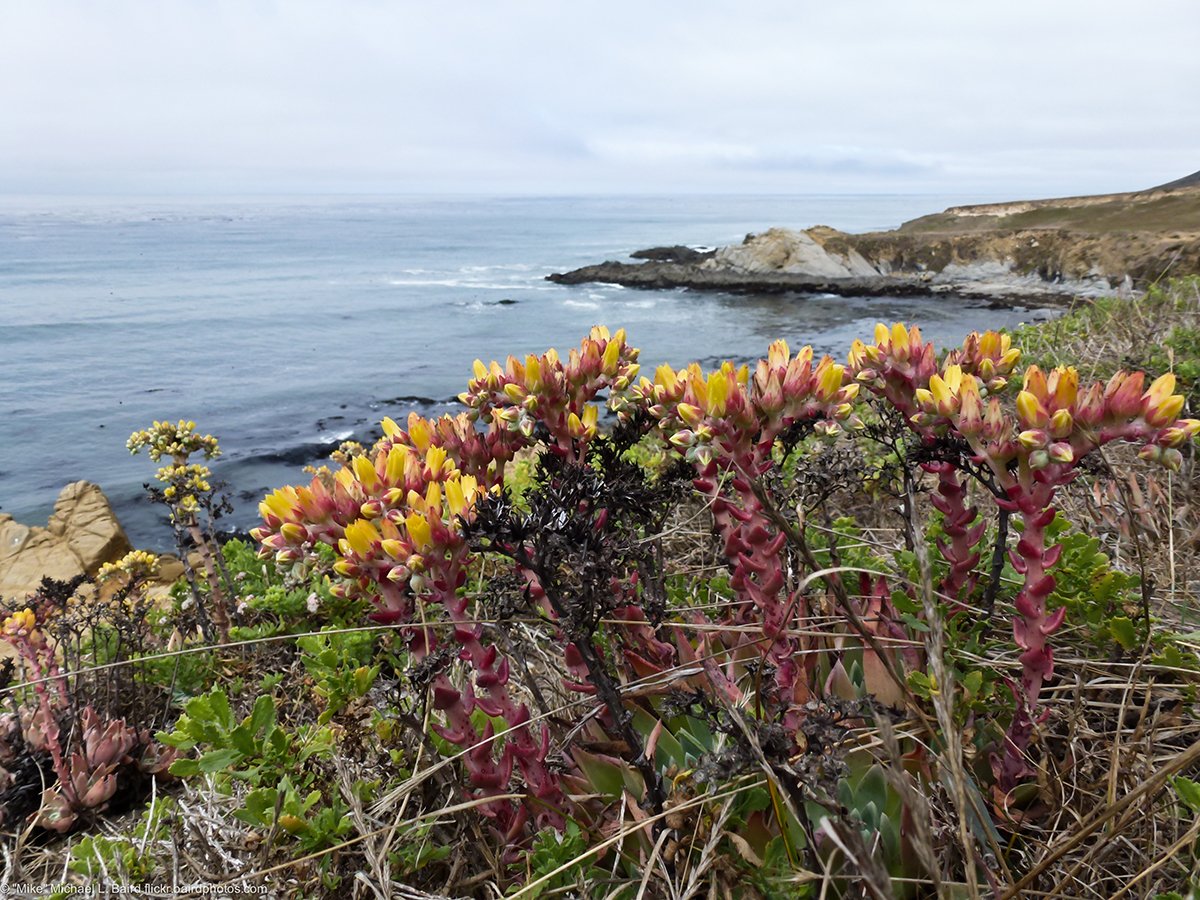 Canyon liveforever (Dudleya cymosa)
Considered one of the showiest dudleyas due to its clusters of brilliant orange-tipped-in-yellow tubular flowers, this silver-leaved beauty is a rock garden standout. Wide ranging throughout California, it is found in high elevation rocky outcrops among chaparral and northern or southern oak woodlands. It forms petite rosettes to 6” across and only 4” high. It is also notable for its abundant flowering spikes being lower than most species (6–10” tall). Hummingbirds love the flowers, adding to this drought tolerant succulent’s appeal. It makes for a perfect xeriscape planting and needs very little soil to prosper. Hardy to 0°F. 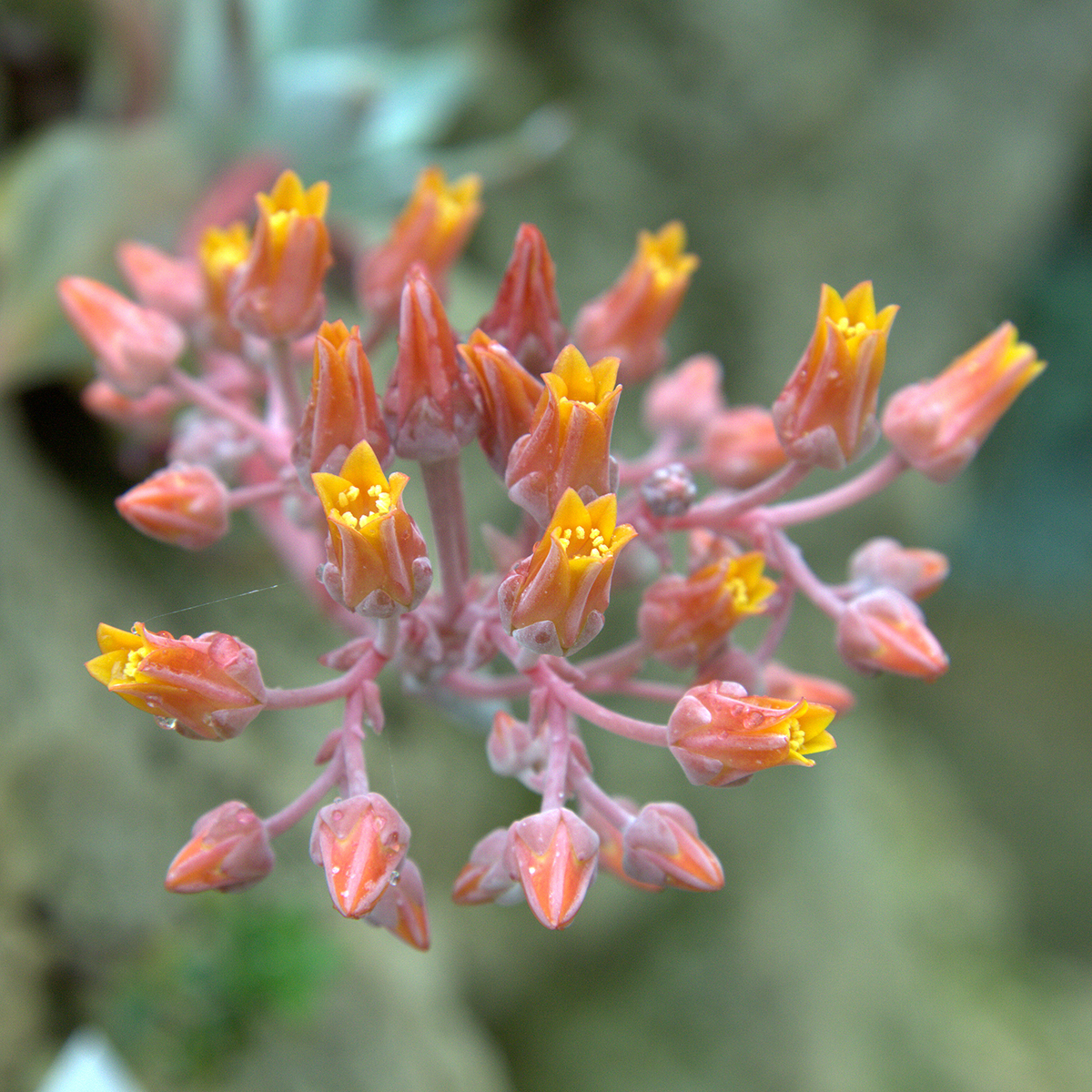 Lady fingers dudleya (Dudleya edulis)
Native to the San Diego area, lady fingers dudleya offers a certain wild charm to any garden. Its rosette is comprised of a thicket of mid-green, upright “fingers” but it’s the flowers, perched atop multi-branching stems, that convey its wild charm. Rows of half-inch, star-shaped white flowers seem to shoot in all directions and are so plentiful they nearly obscure the leaves. It makes a delicate accent in a rock garden and is a fine addition to a bed of other coastal natives. Hardy to 10°F.

Powdery liveforever (Dudleya farinosa)
One of the few liveforever species endemic to Central and Northern California, this striking species is all about the red. Thick, ovate, grayish-green leaves are generously tipped in red, so much so that seen at a distance, rosettes seem as much red as green. This is accentuated by the appearance of fuzzy red flower spikes in early summer. These foot-tall spikes are crowned with upward-facing, tubular, canary-yellow flowers. At times the leaves can appear more silvery, owing to its namesake powdery coating. This species often forms a large mat, making it an ideal choice for a ground cover. Hardy to 28°F.

Lance leaf dudleya (Dudleya lanceolata)
Native to coastal Central and Southern California, this adaptable liveforever is found hanging on sunny seaside cliffs as well as among flatter areas. It forms a rosette of lance-shaped silvery leaves and in summer sprouts clusters of tubular yellow flowers much beloved by hummingbirds. Framed by red bracts and rising on foot-tall stems, the flowers can last for months. Specimens are found in full sun to dappled light shade and can handle soils as diverse as sand, clay, or serpentine mix. Easily forms multiple rosettes. Hardy to 15°F. 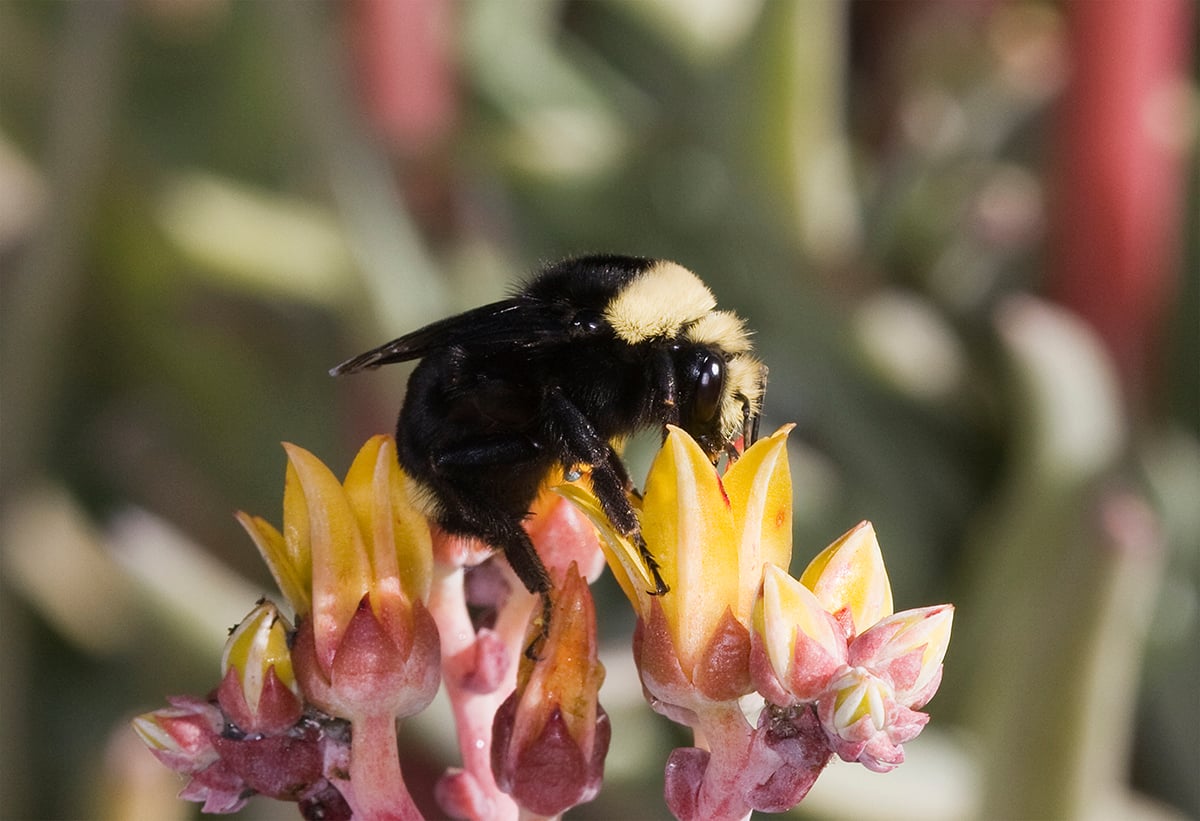 Chalk liveforever (Dudleya pulverulenta)
A giant among liveforevers, this species displays large and broad, chalky-white leaves in rosettes up to two feet wide. Very similar to giant chalk dudleya but larger, it makes a dramatic statement in any dry garden bed. From May through July it produces 18-36” tall, arching spikes filled with nodding tubular red flowers. Sprouting from dramatically white stems, the flowers soon attract hummingbirds. Found along the coast from San Luis Obispo south to the U.S.-Mexico border, this succulent will be happy in your garden as long as it has excellent drainage. It can take full sun in mild zones but will want relief from midday heat inland. Hardy to 12°F. 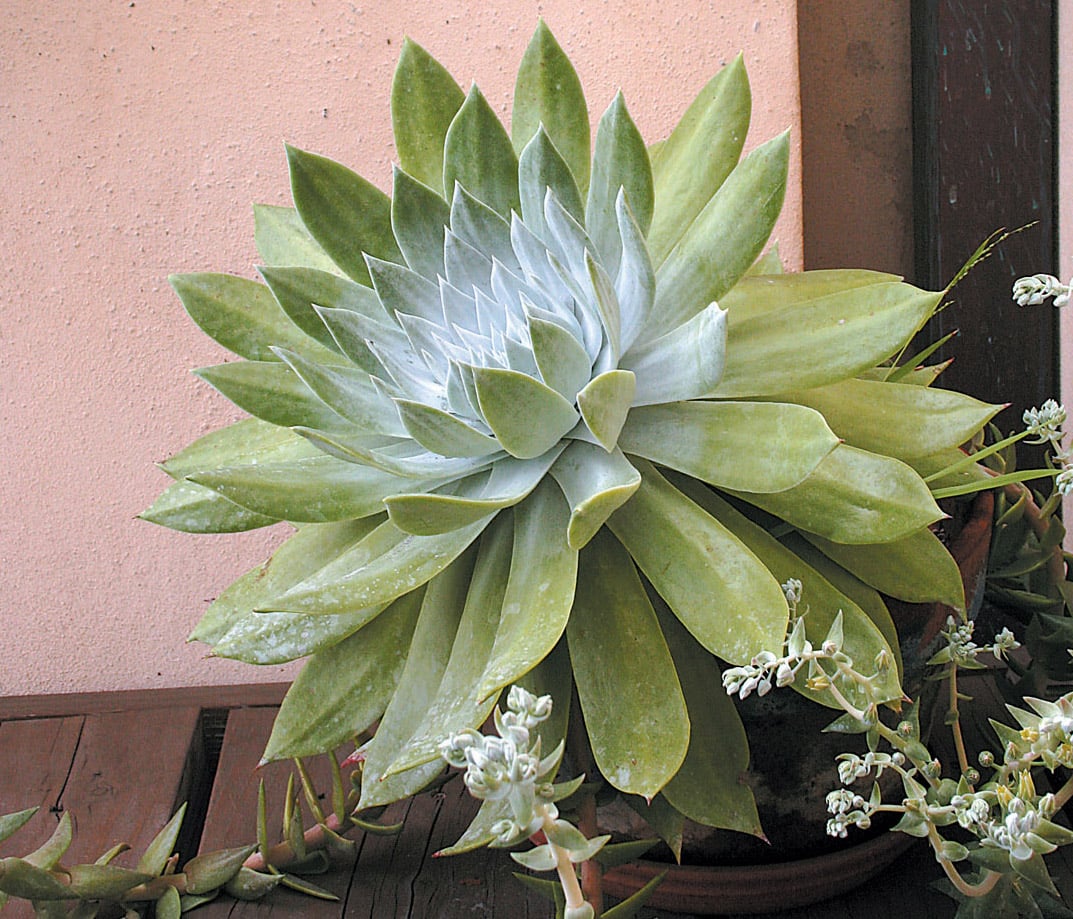 In the wild, dudleyas occupy summer-dry environments. The onset of fall or winter rains awakens them from an often drought-induced dormancy. Their shriveled leaves plump up quickly, growth resumes and flowering occurs during the next spring or summer. Dudleyas are amazingly resilient; if a portion of a colony sloughs off a cliff face or is uprooted by a burrowing animal, it can persist for months until soil contact is reestablished.

Dudleyas grown by nurseries are domesticated compared to those on cliffsides and are better suited to residential gardens. Plant them in a rock wall or at an angle in gritty, fast-draining soil so water drains away from their roots. They often fare poorly in pots as water can pool around their stems. Inland, protect them from hot afternoon sun. Their powdery coating acts as a sunscreen so it’s best not disturb this coating by touching the leaves.

Refrain from watering specimens during the summer. Plants grown in sandy soils or containers are exceptions to this rule. They will accept infrequent summer watering as long as the soil drains well.

Dudleyas may suffer their share of disease and pest problems. Mealybugs nestle in the deep recesses of the leaves and their feeding weakens the plants. They may also be vectors, along with aphids, for a virus that disfigures the foliage. Aphids commonly attack emerging flower stalks, and should be washed off carefully with soapy water or a strong jet of water. Snails and slugs relish the juicy foliage of dudleyas and leave telltale holes. Avoid overwatering, which attracts these creatures and promotes root rot, soil-borne pathogens that may kill the plants. Provide ample air circulation to minimize fungal disease organisms, such as powdery mildew and Alternaria.