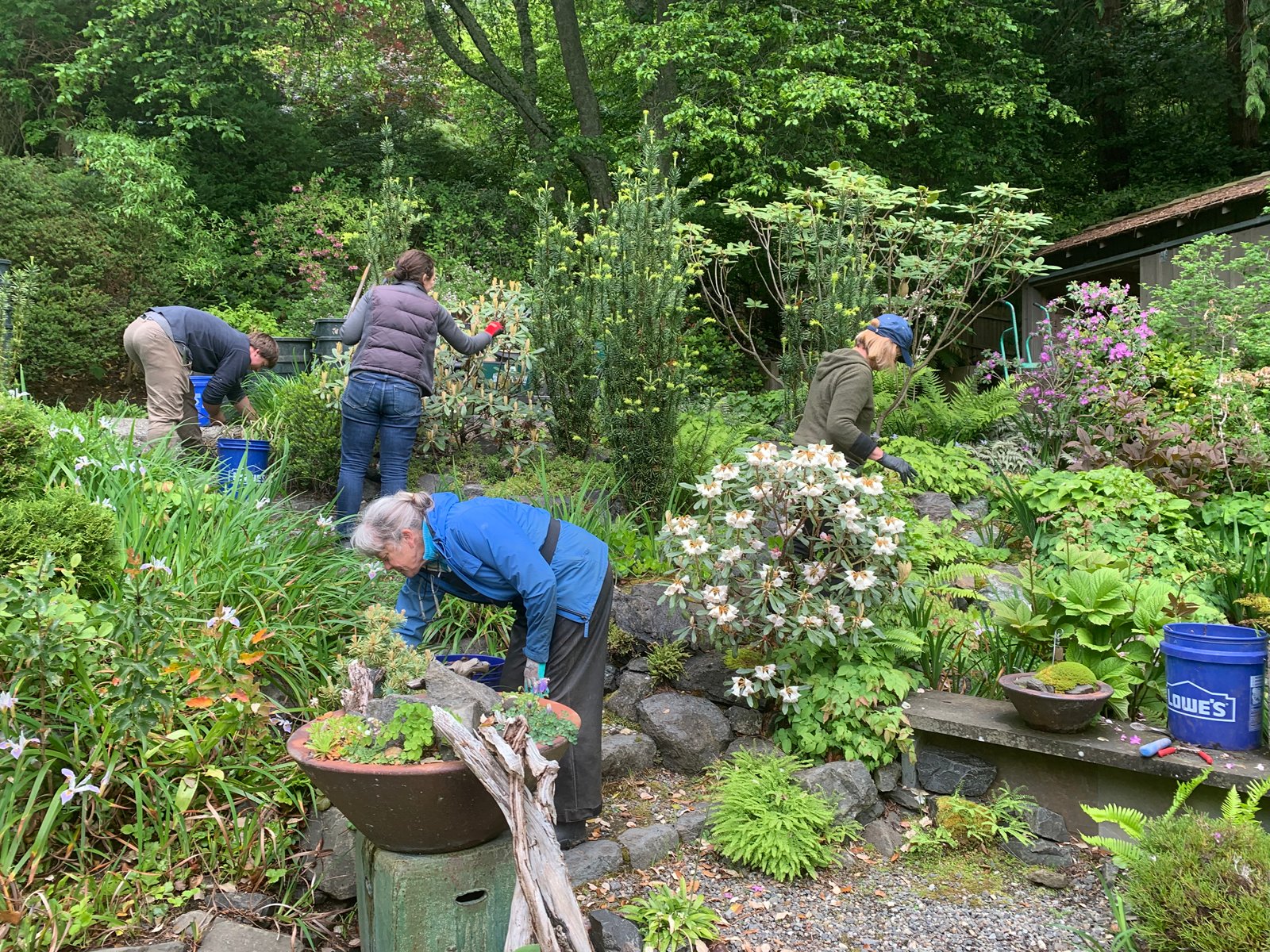 As head gardener at the Miller Garden, Holly works with a regular cadre of garden volunteers. Photo: courtesy of the Elisabeth C. Miller Botanical Garden

Holly Zipp began her tenure at the Elisabeth C. Miller Botanical Garden as an intern in July of 2009. On one of her first days there she walked the terraced 3-acre gardens with curator Richie Steffen. She followed her new boss in stunned amazement as he pulled out foxglove, crocosmia, and evening primrose, all in full bloom. The two began to laugh and a bond was quickly formed.

Just two Julys earlier, in 2007, Zipp was in the midst of another internship in a very different garden: Great Dixter in England. Under the tutelage of master showman Fergus Garrett, she was learning about the adventurous use of color in bold showy borders. She quickly learned the Miller garden had a decidedly different aesthetic, based heavily on woody plants. Color use was understated, showiness eschewed. 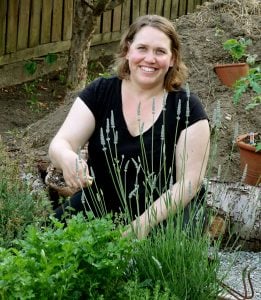 Gardening life began early for Zipp. She gardened together with her father in his Washington D.C. yard. Like many children, gardening work didn’t really grab her. Yet plants did. Many of her grade school and high school science projects were botany based.

And her father was always there to assist her. Already at 10 her father, an architect with a passion for gardens, took her to England to tour famous gardens. Later, during her time at Great Dixter, she travelled farther afield, visiting gardens in Cornwall and Wales. To this day Zipp plans most of her travels around garden viewing; she calls it her “catnip.”

Zipp went on to create her own major in college. She received B.A. from Macalester College in St. Paul, Minnesota, in Biology and Environmental Studies, of course with a strong plant focus. In 2008 she received a Masters in Landscape Architecture from the University of Michigan in Ann Arbor.

The following fall, Zipp headed to Seattle with her partner Eric. They were drawn to the legendary gardening climate of the Pacific Northwest. With youthful optimism they arrived with no prospects, just as the economy collapsed. Yet it did not take long for the personable and enthusiastic Zipp to find work in her field. Her first job was helping a landscape architect compile a book. She later worked for Emerald City Gardens, exposing her to the plants and gardeners of the area.

That winter, Zipp met Steffen at the Northwest Flower and Garden show and first learned about the internship program at the Miller Garden. By July 2009 she was working there. As her yearlong internship finished she was offered an Assistant Gardener position and within a year, would be accepting the title of Head Gardener.

Zipp loves the collaborative nature of her work at the Miller Garden. The small staff is like a family and everyone weighs in on changes and developments, jumping in with ideas or shovels when necessary. She works together with one assistant, two interns, and a handful of volunteers on keeping up the garden. 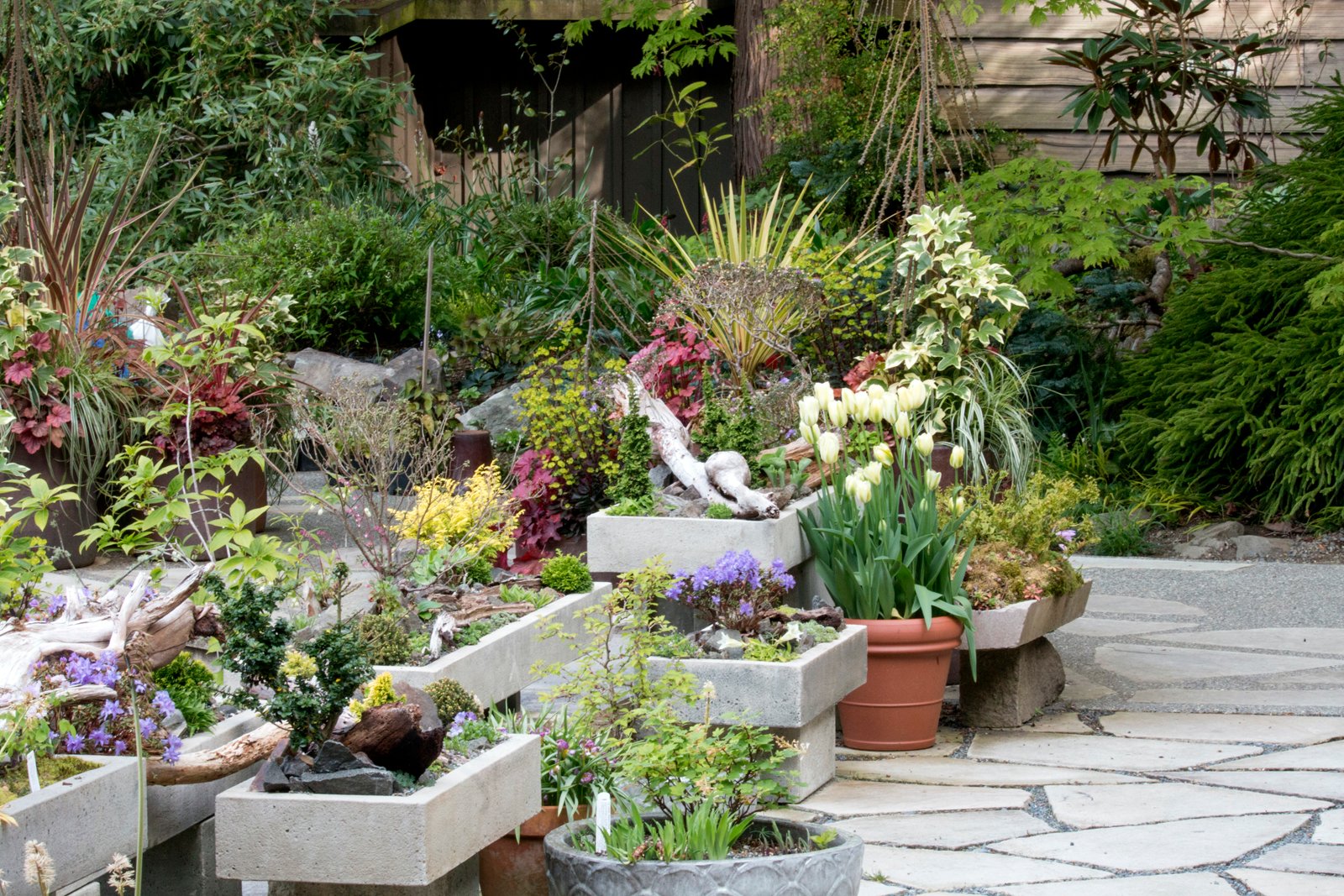 The Alpine garden on the Dining Terrace. Photo: courtesy of the Elisabeth C. Miller Botanical Garden

The days she enjoys the most are those spent gardening, moving organically through the borders, letting everything in her mind slip away, and falling into a deep attentive state. Still she spends plenty of time preparing for and giving tours and classes. She is fed by her time interacting with the savvy public attracted to this unique garden, saying she often learns as much as she teaches.

Most recently she has been put in charge of the newly developed alpine terrace. She finds this an exciting new dimension to the job, and a new area about which to learn and develop expertise. Whether she is weeding under her favorite tree, a canyon live oak planted by Betty Miller herself half a century ago, or researching alpine plants for a class, she always finds her days at the garden enjoyably stimulating.

Like most career gardeners, Zipp’s gardening activities don’t end at the Miller garden property line. She consults and inspires others in their gardening efforts, has served on the board of the Northwest Horticultural Society, and of course, gardens at home.

In 2016, she and her husband Eric bought a 1924 bungalow in the Highland Park neighborhood of Seattle. The house on a sparsely gardened double lot affords plenty of room for the couple to work together. Before buying their own place, they had plenty of practice working together on rental properties in Ann Arbor and Seattle.

Holly isn’t planting foxgloves, crocosmia, or evening primrose in her home garden; she definitely has a more sophisticated plant palette now. Still the couple’s first project was a vegetable garden, and a new patio is in the works. Places to be and work together. Holly encourages their young son, William, to help in the garden, too. No doubt one day soon he will be weeding along side her, just like she did with her father.

The Elisabeth C. Miller Botanical Garden takes horticulture to a new level. Through its intensive horticultural displays, the garden continues in the excellent traditions of gardening that Mrs. Miller insisted upon. For more information, visit
www.millergarden.org.