Duane Lane, a Yakama tribal descendant, spends his weekdays working in Portland as a resource navigator for the Oregon Native American Chamber of Commerce, but his weekends (and often nights) belong to his burgeoning native plants nursery, 1855 Plants.

The name echoes the moment when Lane’s ancestor Chief Owhi signed the Yakama Nation Treaty of 1855, when a confederation of 14 bands and tribes ceded 11.5 million acres to the United States government. The treaty relocated the tribes to reservations and transferred the land to predominantly white male farmers and lumberjacks in donations and claims.

Although Lane grew up in an urban environment, his heart was never far from the land. His mother was an avid gardener. Her father, Lane’s grandfather, grew sweet corn and asparagus and raised Black Angus cattle on allotted land at the Yakama Reservation.  After studying environmental science, Lane worked in wetland mitigation projects using Willamette Valley native plants. He sensed that making native plants more available to gardeners could help reduce water usage and promote sustainable environments that support pollinators. 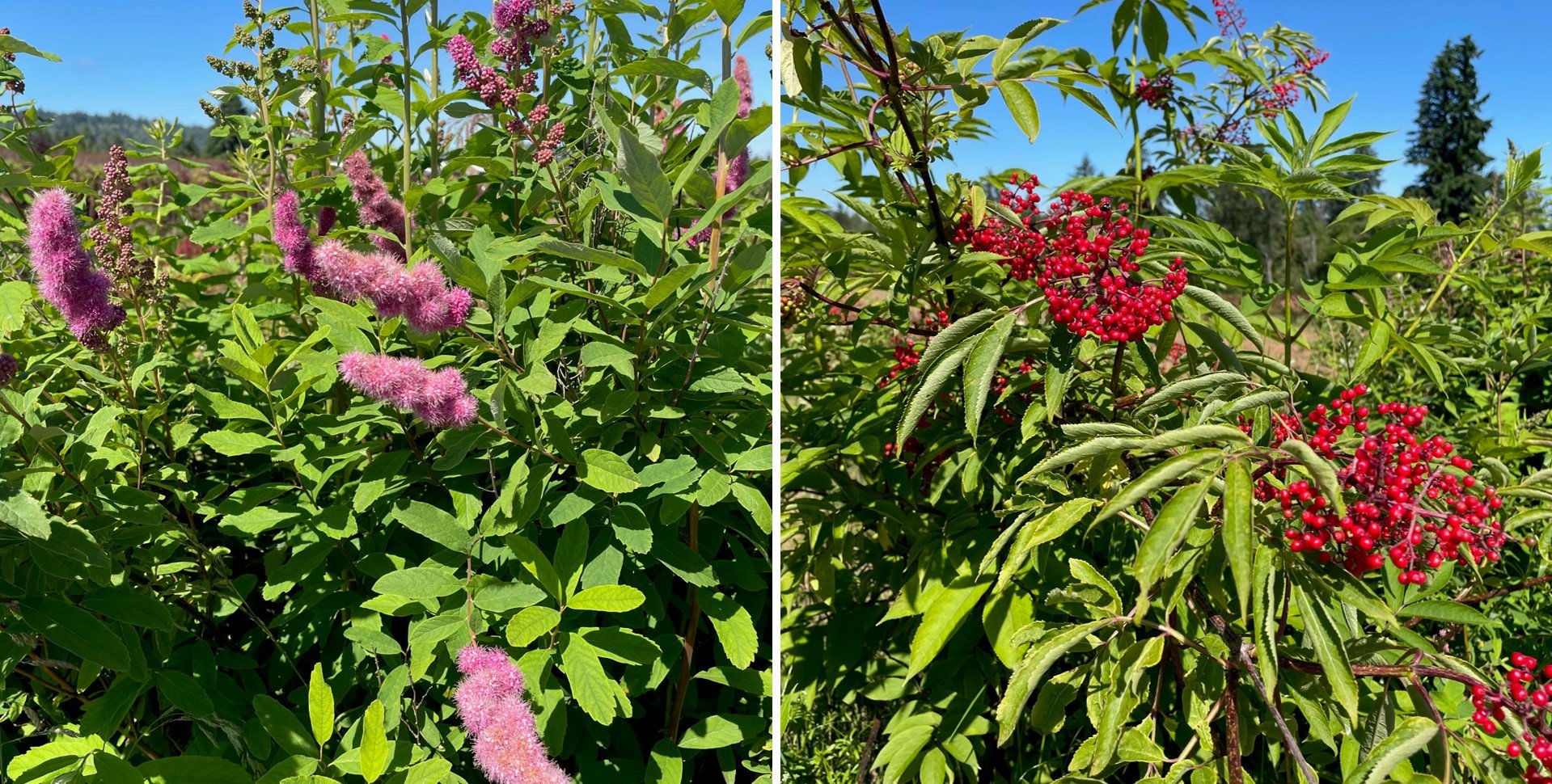 “People were interested. There was a need for native plants, and there’s a void for local nurseries and specifically Indigenous people in this field, historically, as stewards of this land,” Lane said. He honed his vision through an entrepreneurial class with the Coalition for Oregon Native Enterprise at Naya Family Center.

In the Portland metro area specifically, Lane says urban growth restrictions keep some land out of agricultural use, and what is available is expensive. Getting a property loan without demonstrating prior economic success is next to impossible. “Larger lots that are highly desirable are often out of reach for someone in my economic tax bracket,” Lane said. “Unless you have that generational farm or generational property, it’s very difficult.”

After the entrepreneurial course, Lane heard about an opportunity called the Headwaters Farm Incubation Program. During the five-year program, led by the East Multnomah Soil and Water Conservation District (EMSWCD), approved applicants lease land below market value, share agricultural equipment and infrastructure, and receive business and practical training as well as resources, with a goal of launching a successful business at the end. Applicants typically start with a quarter of an acre at the 60-acre property in Gresham, Oregon.  There are currently 17 working farms, with offerings including organic produce, medicinal plants, and flowers. Audiences range from community supported agriculture (CSA) and farmers markets to hospitals (EMSWCD 2022). Land rental rates max out at $750 per year, according to operations assistant Nick Pfeil.

“It’s on a sliding scale, so your costs are increasing every year,” Lane said. “It’s supposed to be a ratio equivalent to the way your sales increase. You have multiple meetings a year with staff to discuss expansion ideas and can propose more space at the end of the year.” Lane also appreciates the guidance on nuts-and-bolts like bookkeeping and tax preparation, which, if done incorrectly, could easily send a new business spiraling.

Headwaters Farm also encourages and teaches planet-friendly conservation practices.  “We’ve turned about 15 acres of the property along the North Fork of Johnson Creek on the property into the Dianna Pope Natural Area, a protected area around the creek, as well as planted native trees along the creek to help cool the water down and support fish health,” Pfeil wrote via email.

Lane’s business—geared toward homeowners or small nonprofits—in addition to design and installation services, focuses on growing containerized plants native to the west side of the Cascades from Washington to California, using regional resources like Native Plants for Willamette Valley Yards. Lane is especially interested in plants that are traditional Indigenous “first foods,” pollinator plants, or useful for urban restoration or rain gardens. 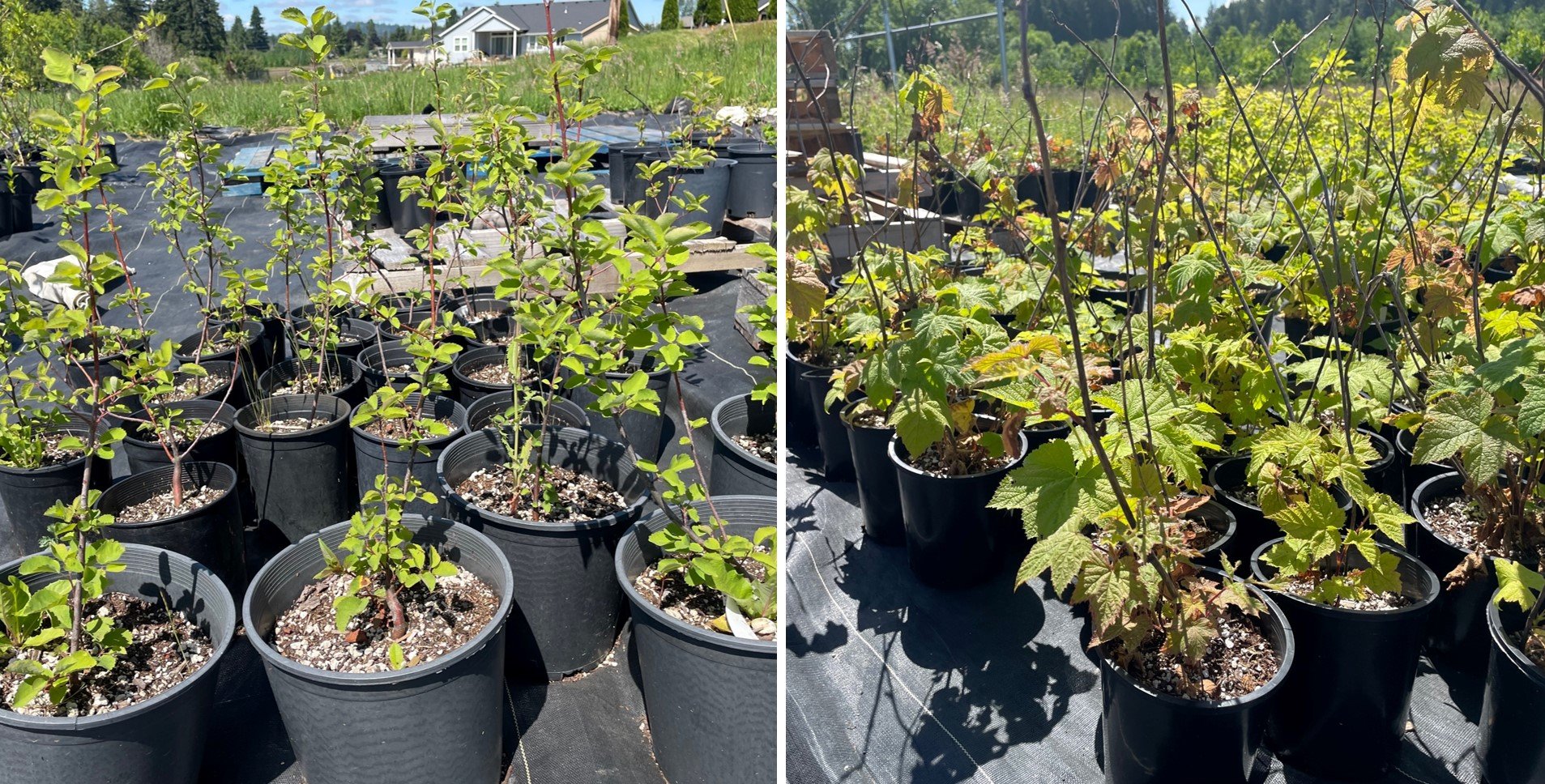 Lane formed a special bond with camas (Camassia quamash), an important first food, when he was asked to rescue some from demolition. A commercial building project was sending bulldozers into a camas field. After friends and native plant groups repeatedly tagged him on a social media post, he joined a community salvage operation—with permission—to dig out the tiny bulbs over three weekends, which were shared among several groups. 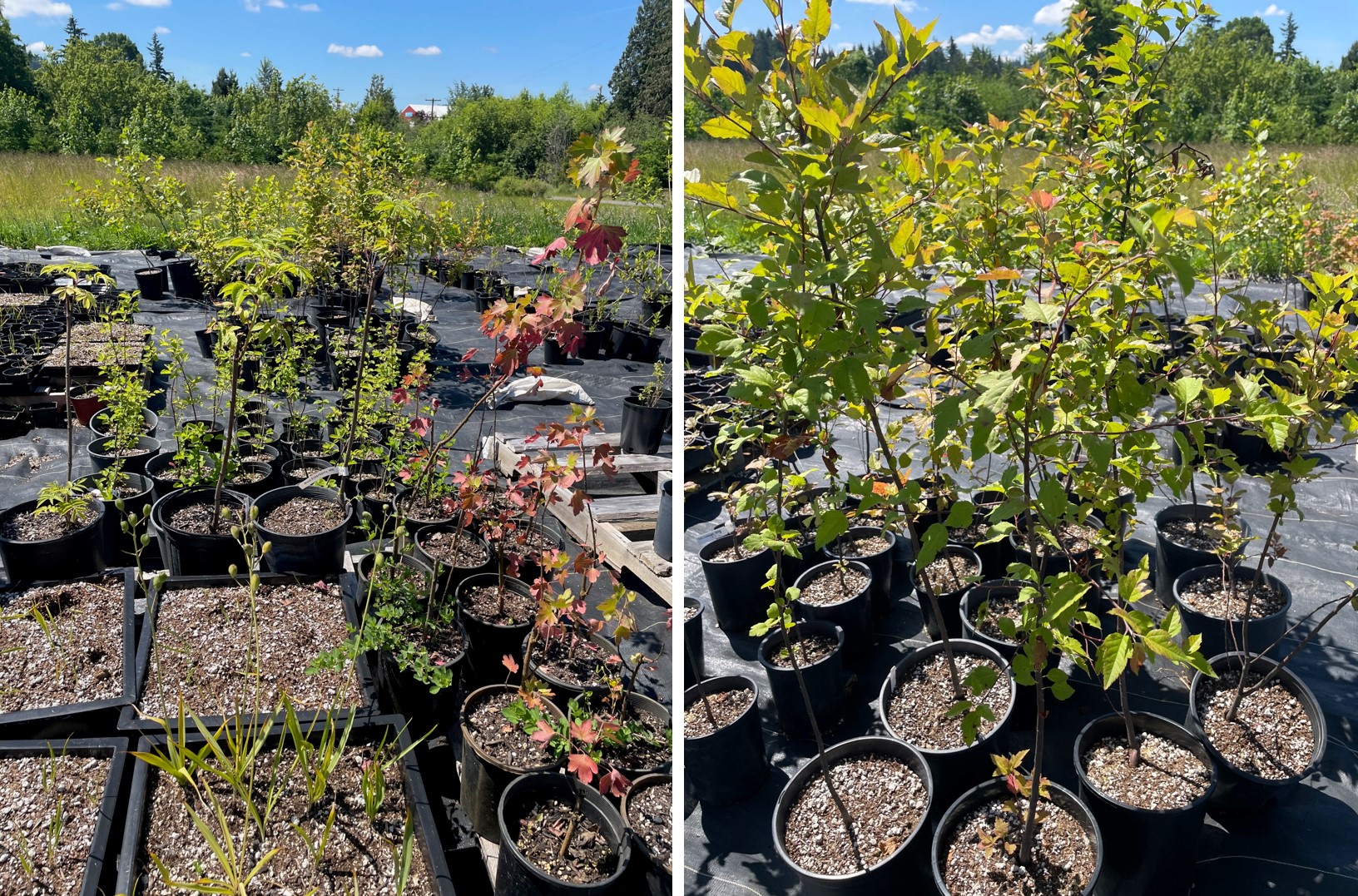 In terms of routine care, there’s no formula. In winter, if it’s snowy or icy, he may not go at all. On the other hand, weather events like the 2021 heat dome meant visiting the farm twice daily for waterings.

Having finished his first year, Lane is still building up his stock before he can sell it. “I do find variety is limited—I’m pulling from seed-savers and wholesale sources from Bellingham, Washington, to Eugene, Oregon,” he said.

He looks forward to having a presence at farmers markets by spring 2023, if not this fall, and his long-term goal is to secure his own land. 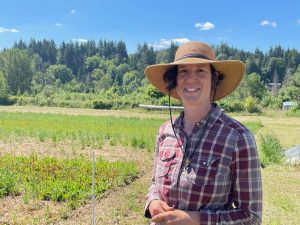 Gentiana Loeffler is also starting her second year in the incubator program, with an entirely different model. Her venture, Root Medicine Farm, centers on supplying rare medicinal herbs—both Western and Chinese.  Rather than marketing the living plants, she is processing and drying the harvested plants for sale to apothecaries and specialty shops.

Loeffler has been farming in some form for 15 years, usually growing vegetables, and mostly for other folks, she noted. Just before this project, she and a friend operated a small micro organic farm in Portland serving produce to a 40-member CSA and did restaurant sales.

In 2014, she spent a month apprenticing with herbalist Peg Schafer at the Chinese Medicinal Herb Farm in Petaluma, California, and became fascinated with the idea of making locally grown medicine more accessible to all.

“Ever since that apprenticeship, I’ve been interested in exploring growing medicine,” she said.

Loeffler was distressed by the paucity of medicinal plants grown in the United States.

She looked for land on her own for two years before discovering the Headwaters program, repeatedly hitting walls. “I came close to leasing land three times, and I learned a lot, but ultimately each one fell through,” Loeffler said.

Of the program, she said, “It’s fantastic to have access to shared land and resources. Almost everything, including water, is leased to us at below-market rate, so it makes it possible to get into farming and gives you the space to figure things out, to work on your business model.”

Loeffler has doubled her land allotment this year and is still a one-woman operation, processing the herbs herself. She’s also had to adjust her methods to her new crops.

“A lot of the Chinese medicinal material is roots and those can take three to five years to come to maturity. Most of what I put in the ground last year wasn’t harvestable. It’s a whole new approach for me, coming from an annual vegetable background,” she said.

Though she makes her own home remedies, she doesn’t plan to market them. She mainly sells dried plants to herbalists, acupuncturists, and healers, but there is a shop in Portland asking about herbal plant starts for next spring.

“Last year I harvested at the farm and brought the product to my house and processed it there. This year I’m working on building a larger herb dryer out here at Headwaters,” she said.

She’s been growing certain plants in response to the upheaval of the last few years. “They support our ability to settle and feel okay in our everyday lives through challenge. That’s been important globally. Along those lines, I’m growing yarrow (Achillea spp.), skullcap (Scutellaria spp.), and St. John’s wort (Hypericum perforatum).” 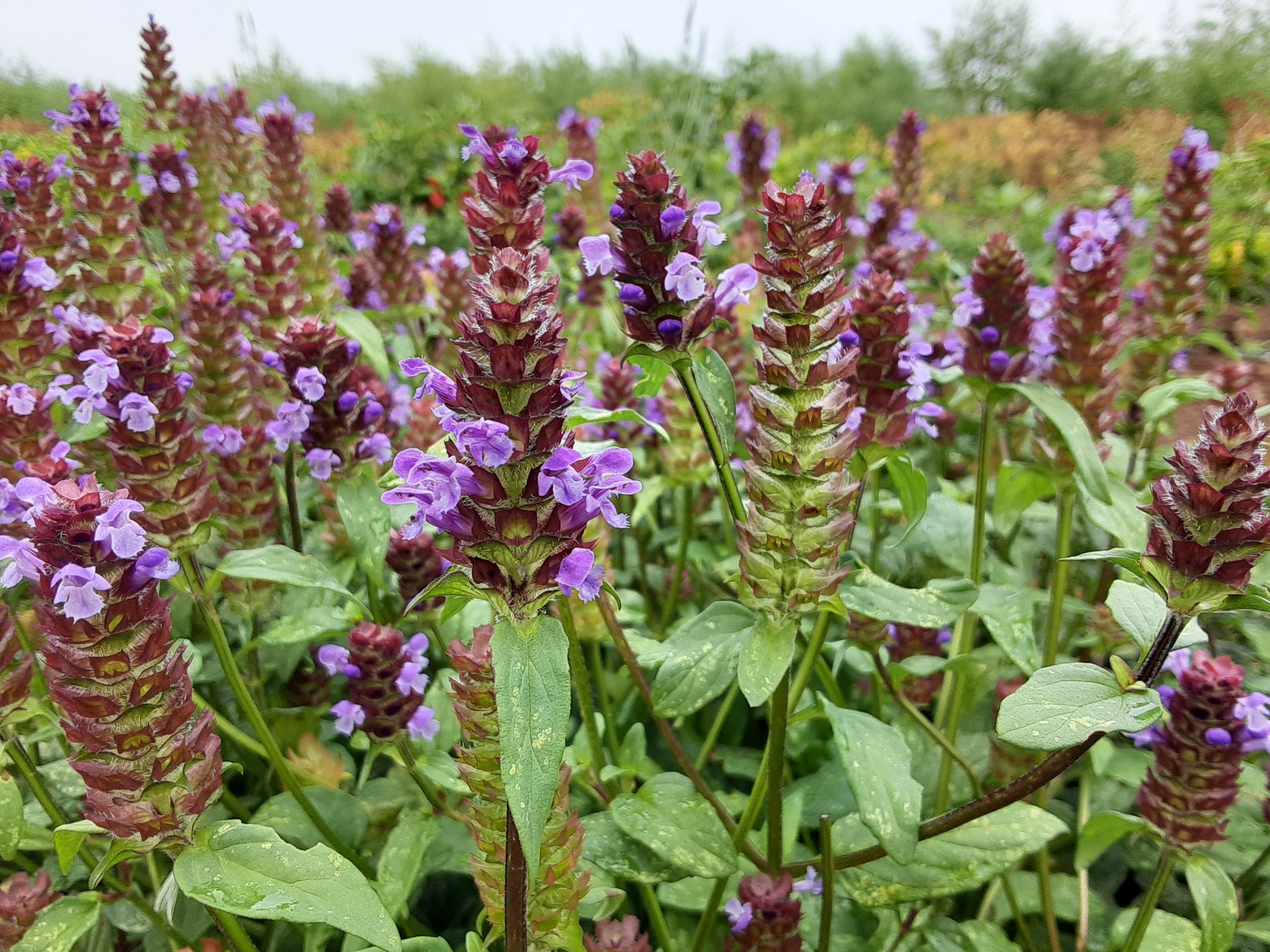 She grows heal-all (Prunella vulgaris) a plant with a rich medicinal history in China and the Americas, typically for lessening inflammation and boosting circulation.

Loeffler’s also experimenting with growing passionflower (Passiflora spp.) “It likes warmer, drier climates but is hardy to Zone 7,” she said.

Looking ahead, she says she may explore cooperative models to secure land tenure for Root Medicine Farm.

If you have any problems logging in, please email Noah at noah@pacifichorticulture.org

Not yet a member? Join today