A number of scientific articles examine how plant processes at the cellular or organ level interact to contribute to recovery from drought. As we come out of yet another winter with sub-average rainfall, it is useful to consider what our plants might be experiencing and how climate warming might affect their health. 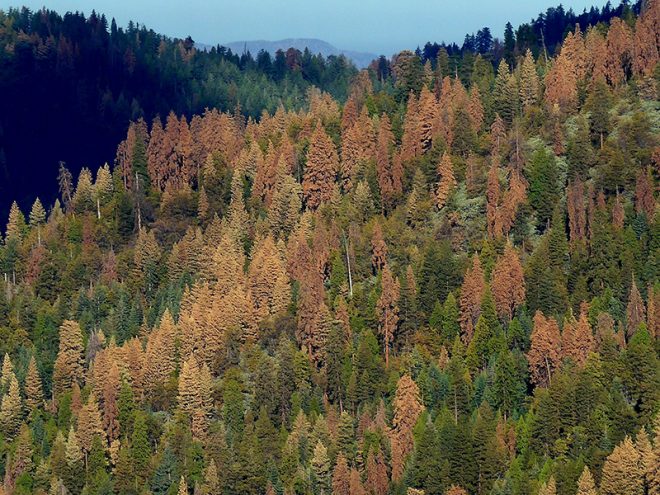 Fix the pipes, and the powerplant! 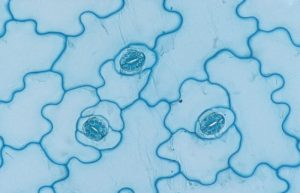 Stomata close when a plant is under water stress due to drought which limits photosynthesis.
John Adds CC BY-NC-SA 2.0

Imagine you are a tree, just coming out of a difficult drought; what “parts” should you repair first? A framework by Nadine Ruehr and colleagues suggests that two major systems need to be restored: the hydraulic (both the xylem and the cells outside it) and the photosynthetic (both the photosystem 2 [PS2] in the chloroplast, and the stomatal gas exchange control). The article elaborates on the sequence of recovery. On the photosynthetic side, gas exchange is first to be disrupted as the stomates close, and first to recover, whereas the PS2 is less easily inhibited but also takes much longer to recover. In the hydraulic system, water transport recovers first in cells outside of the xylem, followed by xylem recovery from embolisms, air bubbles that break the water column and stop water movement.

But if the drought was severe enough to damage the cells, and to embolize the xylem, then recovery is either slow, or is never completely successful. This is a problem, because the tree—having used its carbohydrate reserves to carry out the repairs—is now left with depleted energy stores and an only partially-functioning xylem. And a vicious circle begins: the damaged xylem cannot convey enough water to the leaves to rebuild the photosynthetic machine, which, as a result, cannot produce enough sugar to “fund” new xylem growth (essential for recovery, as the old xylem cannot be fully repaired). The authors also include in their model a discussion of heat. In brief, heat added to drought will exacerbate the problem; we will return to this issue. 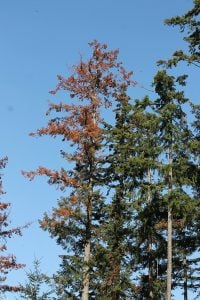 And so, what would the above model suggest about predicting drought recovery? We could expect that the degree to which a tree recovered from preceding droughts may also suggest its ability to recover from a present drought. On this issue, Lucia DeSoto and colleagues use tree ring analysis to show that indeed, trees that survived a current drought (the “survivors”) had been more resilient to past droughts than the trees that died in the current drought (the “casualties”).

But it is also notable that broadleaf trees and conifers use different strategies to achieve this resilience. The angiosperms seem to show “resistance” to drought—i.e., the angiosperm survivors held their growth rate constant through the past droughts, whereas the angiosperm casualties exhibited immediate growth reduction in the past droughts (yet, both the angiosperm survivors and the casualties recovered at similar rates after those previous droughts). Gymnosperms, in contrast, rely primarily on “recovery” for their resilience. Both the survivors and the casualties reduce their growth rate during droughts, but in gymnosperm survivors, the growth rate rebounds more following the drought than is the case with gymnosperm casualties So, when it comes to drought, growth, and survival, past performance just might predict future results, but the details of the resilience mechanism differ.

Predicting recovery by looking at water content and cell vitality

This leaves us with the issue of what else we might examine, if we wish to predict the ability to recover from drought and are unable to work with tree rings. Remember the conceptual article that we examined first? It noted the importance of water status not just in the xylem, but also in cells outside of the xylem, a concept summed up in the term “Relative Water Content” (RWC). Marylou Mantova and colleagues show that it is possible to use RWC— measured as a tiny increase in stem diameter after a drought-stressed tree was re-watered —to predict which trees will recover from dehydration and which ones are likely to die. However, the method worked much better for conifers than for the angiosperms. To predict death or recovery in broadleaf trees, the authors were able to use a different method, electrolyte leakage (EL), which indicates cell damage. The remarkable aspect of this method is the way it was visualized: the authors cross-cut small tree stems into thin discs and prepared microscope slides. Then they stained the slides with fluorescein diacetate, a dye that binds to living cytoplasm. The difference was stark. When illuminated with UV light, drought-stressed stems that were about to die looked like pale yellow discs (showing no living cells to which the dye could bind), but the stems that would go on to recover from drought shone with a bright, glowing, yellow ring around the perimeter, indicating the persistence of living cells under the bark. 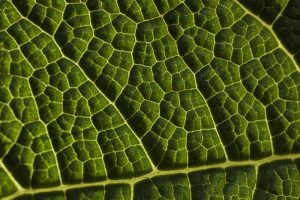 Here is a brief note about the heat-drought interaction, which is problematic in at least three ways. First, warm air extracts more moisture from a plant than colder air at the same relative humidity (it has a higher “vapor pressure deficit”). Second, that same effect causes more moisture to evaporate from the soil surface, thus reducing available soil moisture. And third, heat damages the leaves, first cooking the photosynthetic enzymes (above about 42°C/104°F), and eventually even the leaf tissues and structures (above about 50°C/122°F).

So, considering the effects of climate change, should we expect our future droughts to be hotter and hence more damaging, or cooler and thus less damaging than past droughts? In their 2015 article, Noah Diffenbaugh and colleagues provide a succinct answer: “…additional global warming over the next few decades is very likely to create ~100 percent probability that any annual-scale dry period is also extremely warm” (p. 3931).

But wait, I heard that some models predict a slight increase in California rainfall with global warming, so we might be okay, right? No, they continue: “…our results show that even in the absence of trends in mean precipitation…the risk of severe drought in California has already increased due to extremely warm conditions induced by anthropogenic global warming” (p. 3934). In other words, irrespective of our uncertainty about future rainfall, global warming assures us of more demand for water, and thus more droughts. And in California, those future droughts will all be hot droughts.

Note: For an approachable discussion of vapor pressure deficit and why it matters to plants, please see this brief explanation from MSU Extension: https://www.canr.msu.edu/uploads/resources/pdfs/vpd-vs-rh.pdf