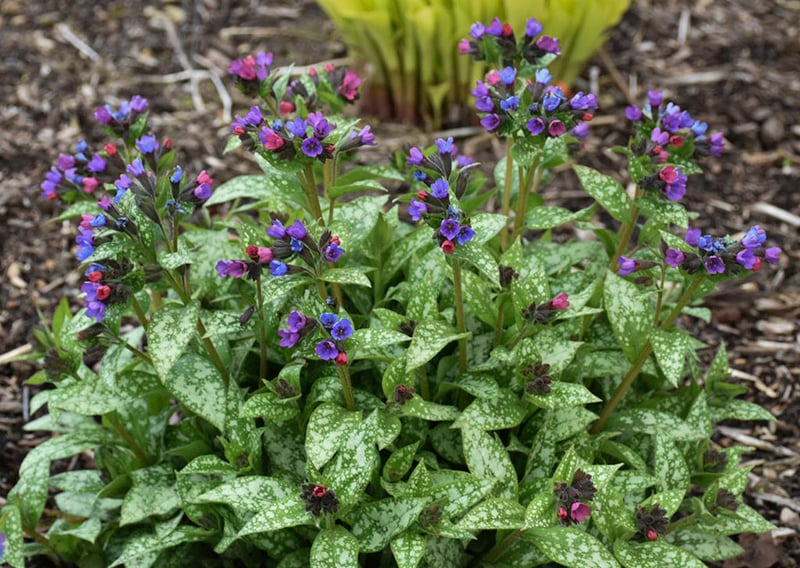 It is natural for creators of ornamental gardens to be attracted to the brightness and variety of flowers. Their colors and forms dazzle us and many attract a wide variety of pollinators. Yet one can think of flowers as the dessert in a meal, with the foliage being the main course. And those main courses can also exhibit an astonishing variety of form, color, and even singular beauty of their own. This article looks at a few unusual foliage plants, with a focus on plants exhibiting leaf variegation or spotting. The plants described here represent only a small sampling of these eye-catching markings but they will show how dazzling nature can be.

Salix integra ‘Hakuro-Nishiki’ is a unique shrub unlike any other on the market. The eye-catching multicolor foliage flushes out pink in spring, then gradually mature to a dappled mix of pink, creamy white, and green. Seen from a distance the creamy tones dominate, but up close one wonders at the speckled splendor of the foliage. Though most willows are trees, this shrub fills out to only six feet tall and wide, with graceful arching branches. It prefers a bit of shade and regular watering while getting established, and is a winner of the prestigious Royal Horticultural Society (RHS) Award of Garden Merit. 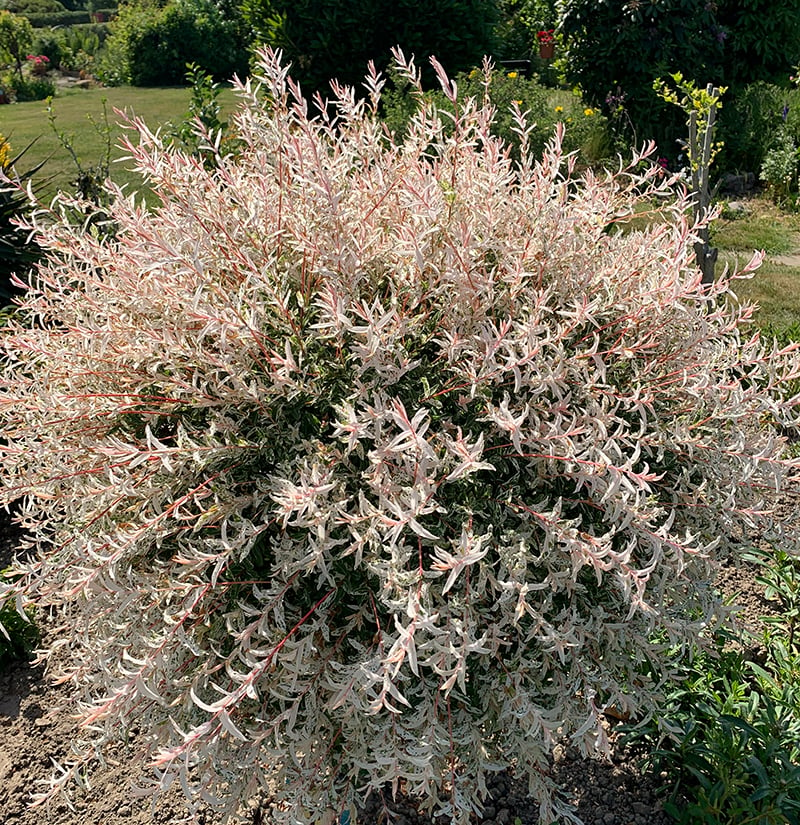 Conifers may at first seem a bland addition to the garden but, truth be told, there are some fabulous and unique dwarf variegated selections. Two Chamaecyparis (false cypress) varieties demonstrate this beauty. Chamaecyparis pisifera ‘Plumosa Compressa’ has mint-green cedar-like foliage blazoned with creamy-yellow tips. The spring flush of new growth especially makes this evergreen shrub glow in a partially shaded location. The rough texture of the leaves adds a tactile element as well. It tops out at three to five feet high and wide. ‘Snow,’ another C. pisifera hybrid, forms a dense ball shape and concentrates the “dusting” of white on the tips of its bluish-green leaves. It is considerably smaller, topping out at 14 inches tall, making it an excellent choice for a container or bonsai. 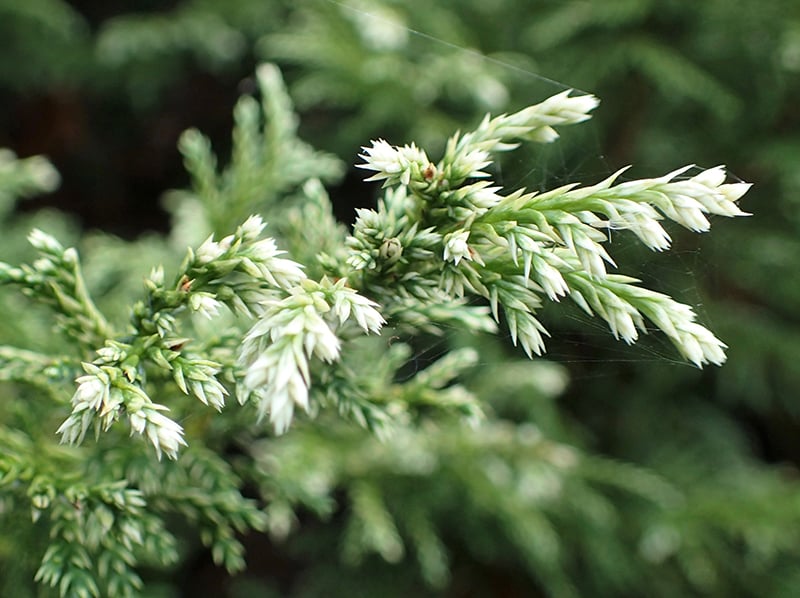 Variegation is also the calling card of the fabulously striking Osmanthus heterophyllus ‘Goshiki.’ Goshiki means “five colored” in Japanese, and swirls of cream, yellow, green, pink, and white on each leaf give this sturdy evergreen shrub a one-of-a-kind appearance. Unlike Osmanthus fragrans (sweet olive), this partial shade-loving shrub rarely flowers. Don’t let that deter you from finding a spot for it in your garden, because when planted among shrubs that exhibit simple green foliage, this tough customer really stands out! Though it can reach eight to ten feet tall, it can be easily pruned to a more compact four to six feet in height. It is another RHS Award of Garden of Merit winner. 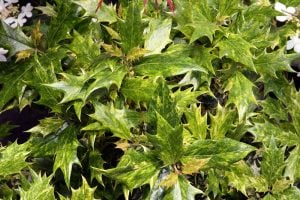 If it’s warmer colors you’re after, consider Berberis ‘Goruzam’ Golden Ruby®. It comes blazing out of the gate with coral-orange foliage that lasts all summer. Come fall, it turns a fabulous mix of day-glow orange to brick red, accented with gold margins. This pint-sized deciduous shrub (to three feet) loves the sun and is generally disease and insect free. It’s also very cold hardy, which is why you see it in northeastern US gardens. It has thorns, of course, but that only adds to its unique charm!

Sometimes the noteworthy aspect of a shrub is its branching pattern. That’s particularly true for the curious Corylus avellana ‘Contorta.’ Possessing one of the quirkiest common names, Harry Lauder’s walking stick, this shrub features thin branches that divide and twist in all directions, making it seem more sculpture than living plant. Add to that the clusters of dangling yellow catkins in winter and this plant seems like something from the world of Dr. Seuss. The bare branches and decorative catkins make this one of the best plants for winter beauty. When it leafs out in spring, the small reticulated leaves seem to sprout from every part of the shrub, clothing it in a verdant green. It is also an RHS award winner. 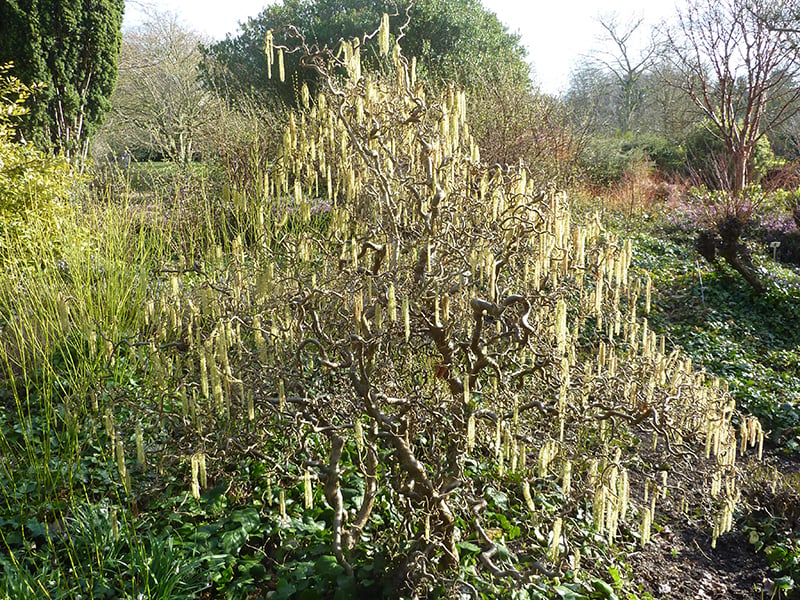 There are a group of plants whose caudex (“fat bottom”) is the star attraction. One such shrub is Cussonia paniculata. Known curiously as cabbage tree, it forms a fat, twisted, above-ground caudex that feels like cork to the touch. From this base grow branches of large, bluish-green, palmate leaves. Unbranched plants have a distinctly palm-like appearance. Native to the savanna regions of Zimbabwe and South Africa, it nonetheless can handle our temperate climate. 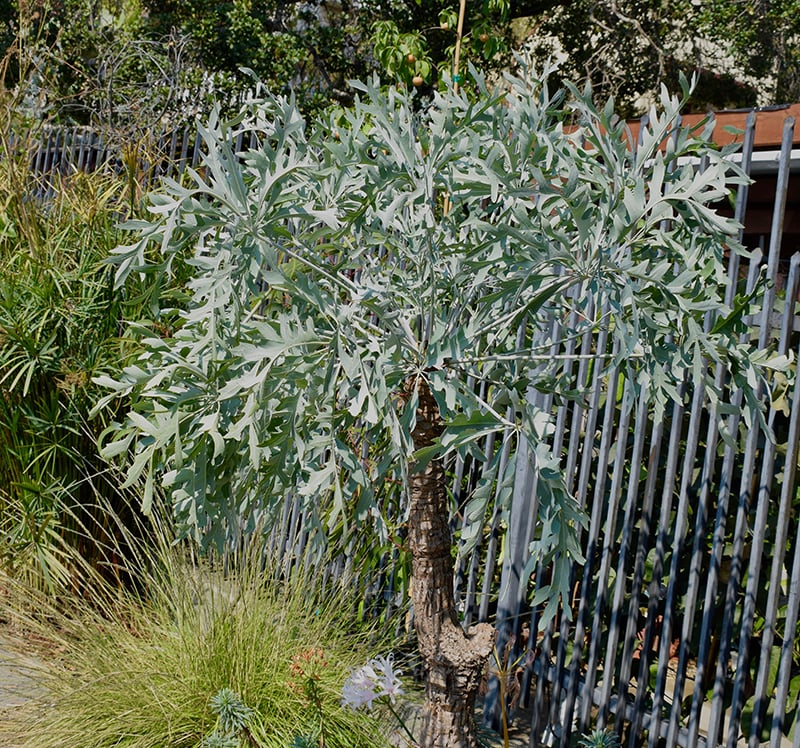 Sometimes the charm of a plant lies in it being unusual unto itself. Most of us are familiar with the huge, purple-flowering jacaranda trees. But did you know that there is a dwarf, bush form of this genus? Jacaranda mimosifolia ‘Sakai01’ (Bonzai Blue PP26,574) forms a dense shrub four to six feet high and wide, and is notable for its attractive fern-like foliage, as well as those pretty tubular blue flowers. Even when not in bloom this shrub makes a statement all its own! It is great as a focal point and easily grown in a large container.

Perennials with Spots and Stripes

There are endless perennials that would happily wear the mantle of unique foliage. Here are five of my favorites. Leopard plant is an apt name for the brightly spotted Farfugium japonicum ‘Aureomaculata’ (syn. Ligularia tussilaginea). This shade-loving, semi-evergreen plant produces a bevy of glossy green, kidney-shaped leaves that eventually acquire prominent yellow spots. In the fall, 24-inch-tall branching spikes of yellow, daisy-like flowers add a splash of color. Bees are drawn to the flowers and are in fact its pollinators. The leopard makes a dramatic statement in any shady bed. 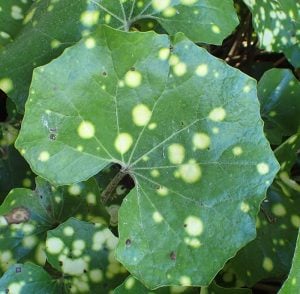 Speaking of spots, Pulmonaria officinalis is another shade-lover that holds its own in the spotting department. Oblong mid-green leaves showcase a great many white spots or blotches, giving the plant a dreamy kind of variegation from a distance. Sprays of tiny pink or purple tubular flowers in summer add a contrasting splash of color. It stays low so can be used as a singular ground cover, though it’s so pretty when in bloom you might want to feature it in a container. It acquired its unusual common name, lungwort, owing to the generic name from “pulmon,” meaning lung in Latin. Back in the day of sympathetic magic, the spotted leaves were said to mimic diseased lungs and concoctions of the plant were used to treat lung diseases.

Perhaps the easiest way to add attractively spotted plants to a part-shade location is with one of the many angel-wing begonias. Varieties of this cane-type begonia have become very much in demand in recent years. With large elongated leaves and dramatic white spots against dark-green backgrounds, these evergreen begonias provide a year-long display. Many also feature sprays of bright pink or pure white flowers in late summer. They are happy in containers and add a dash of wow to any part sun or bright shade location.

For something modern and stylish, consider one of many ×Mangave varieties on the market. Mangaves are intergeneric hybrids created by cross-breeding Agave and Manfreda. This succulent is perfectly at home in sunny, dry garden environments, possessing traits of durability found in both parents. One of the most striking varieties is aptly named ‘Spotty Dotty,’ with an even pattern of dark spots splashed against a green backdrop. Slightly wavy, three-dimensional leaves add to the plant’s character. It is a bit frost tender, and steps should be taken to protect it on cold nights. 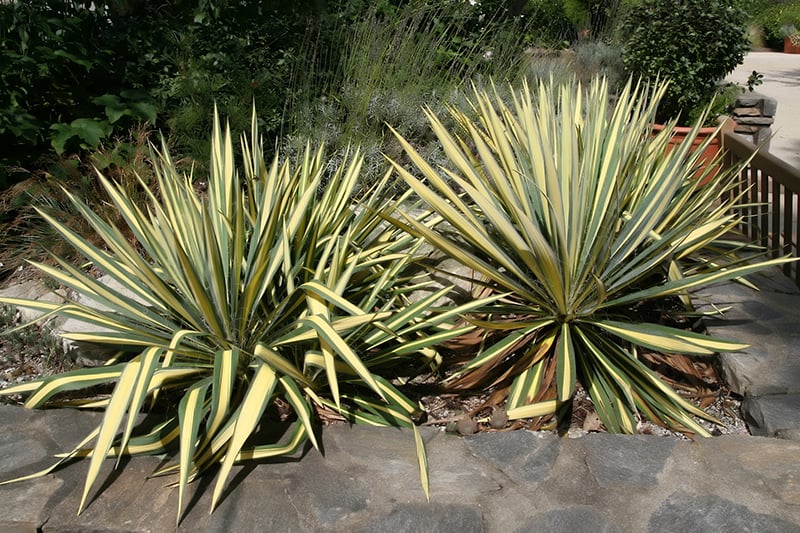 When many gardeners first think of yuccas, they think of plain green leaves, but there are a number of highly decorative striped varieties available at your local nursery. Two Yucca gloriosa varieties are standouts. Yucca gloriosa ‘Walbristar’ (Yucca Bright Star PP17,653) is aptly named, and seems to glow from the inside at sunset. New growth arrives sheathed in golden tones, then ages to bi-colored green and yellow. For a more subtle variegated look, Yucca gloriosa ‘Variegata’ has grayish-green leaves that are bordered in a creamy yellow. Yucca filamentosa ‘Color Guard’ reverses the color pattern, with golden ribs and green borders. All are drought tolerant and cold hardy, with the bonus that deer will leave them alone.

Japanese maples are an excellent choice for adding some sparkling foliage to your garden. There are several offerings with variegated leaves. Acer palmatum ‘Peaches and Cream’ displays an eye-catching mix of cream and orange tones in spring, then ages to green and cream, before going out in a blaze of oranges and golds in the fall. At a modest eight feet tall and wide, it is easy to add to the garden or even grow in a large container. The more subtle A. palmatum ‘Butterfly’ sports light green leaves bordered with cream and sometimes pink, while A. ‘Beni Schichihenge’ amps up the drama with pink margins for a more vivid display. All Japanese maples drop their leaves in the late fall, but in the milder zones leaf out again in early spring.

Sometimes the interest in a tree is in the unique variety one chooses. Ginkgo biloba is a well-known tree that ultimately grows to 40 feet tall, but did you know that there’s a dwarf variety called ‘Jade Butterflies?’ Reaching a modest ten feet tall with darker, almost glaucous leaves, it perfectly showcases the plant’s distinctive leaves and that blazing gold color in fall. There is also a green and cream striped variety called ‘Majestic Butterflies,’ though it is harder to find. Ginkgo trees love full sun and well-drained soil. 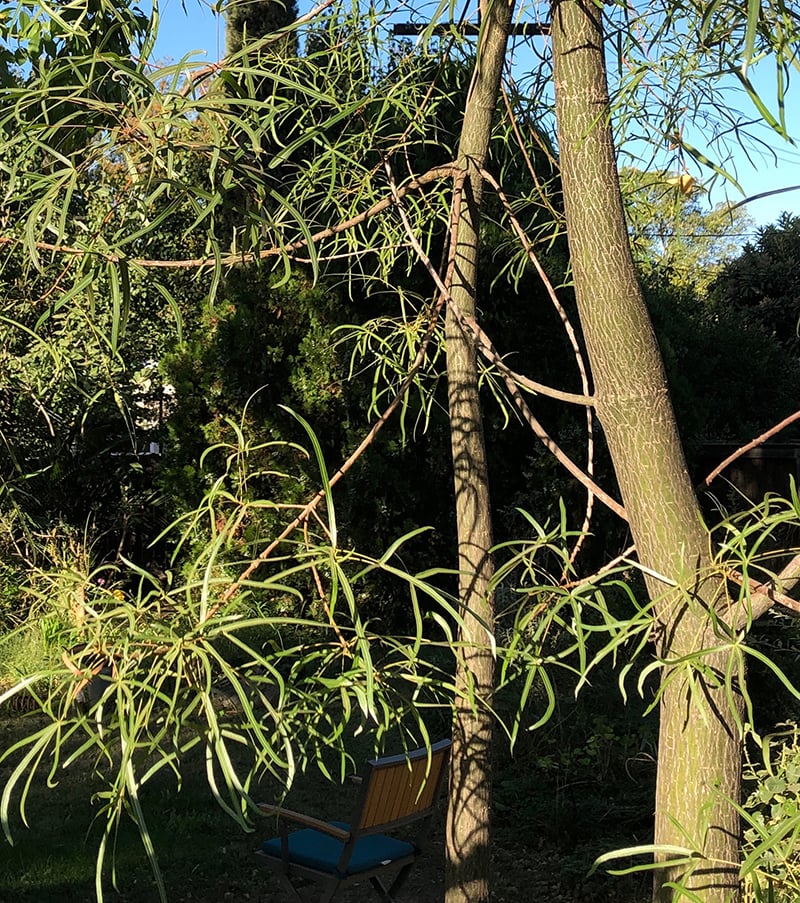 Lastly, for something unique in a tree, try Brachychiton rupestris. Known as Queensland bottle tree, it forms a fat trunk that can reach an amazing six feet in diameter. It grows slowly but steadily, with compound juvenile foliage that transitions over time to long, narrow, elliptical leaves. Although it can reach 50 feet tall in the wild, it will likely top out at 20 feet in our more temperate gardens. In fact, it can even be bonsaied in a large container, topping out at six feet. Sometimes known as the Buddha belly tree due to its fat trunk, it most certainly makes for a fabulous focal point in the garden!