Until very recently, wildfire was not a landscape professional’s concern. Several factors have combined to make it one today. Homes in wild places like forests and mountains are increasingly popular and feasible. Population growth is pushing development into new lands, some covered with “fire-adapted” vegetation that requires periodic burning to reproduce or compete with other species. Flight from cities perceived as dangerous and suburbs perceived as boring has motivated a new back-to-nature exodus. Instant communication, telecommuting, and four-wheel drive allow living comfortably in the wilds. Around and even within many cities and towns, residential development is colliding with relatively undeveloped forests, creating what is called the Urban Wildland Interface (UWI) Zone or, more bluntly, the Wildfire Danger Zone.

The second factor in making wildfire a landscape issue is what ecologist George Wuerthner calls “a century of failed forest policy.” This policy, with Smokey the Bear as its mascot, suppressed all fires to protect timber interests, scenic parks, small towns, and a few homesteads. Suppression, however, produced overly dense stands of small trees that, when they do burn, do so explosively.  Years of drought have dangerously amplified this situation. 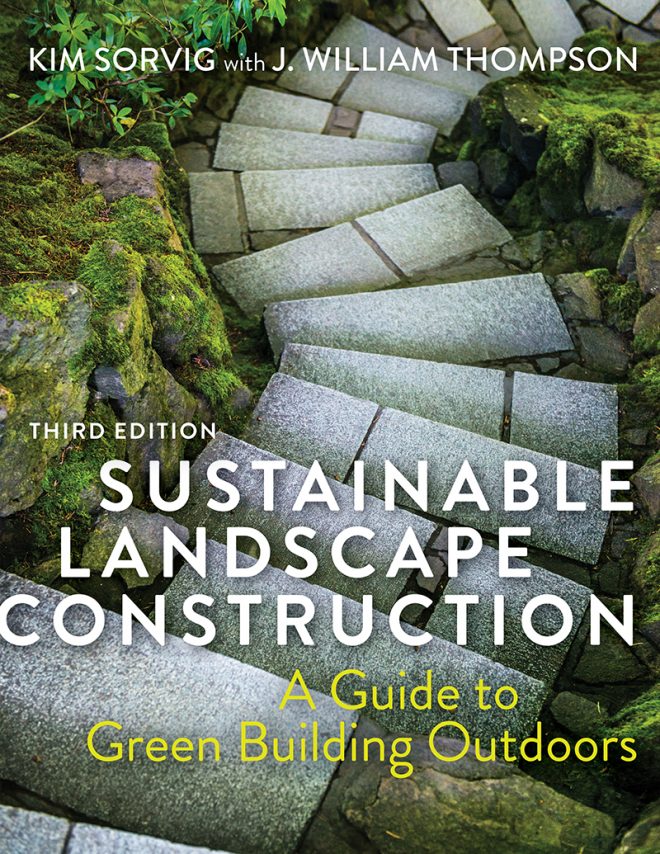 Thus, exurban development has collided not just with forest, but with unhealthy, tinderbox forest (Figure 2.19). It is for this reason that wildfire is a land-scape-scale restoration issue.

In 2000 a spectacular wildfire started when a National Park Service preventive burn got out of control. Public outrage focused on the federal government, which predictably threw money and regulations at the problem. These regulations make wildfire an issue for landscape professionals, especially when trying to work sustainably.

Regulations imposed in UWI areas typically focus first and foremost on vegetation clearance, which fire activists call “fuel reduction.” These regulations typically require removing 60 to 80 percent of vegetation for at least 30 feet around every structure, and in some cases over 600 feet. The only plants allowed are those considered fire resistant, almost always non-native, irrigation-dependent species. Similar clearing is required for 10 feet on either side of driveways, which must often be widened to urban standards: 20 feet wide and all weather, which for practical purposes means paved. These regulations are often retroactive, requiring removal of existing landscape plantings. In some jurisdictions, authorities have the power to carry out clearance and add the bill to property taxes; a citizen can theoretically lose ownership of property for not clearing it.

The federal government offers millions of dollars for state and local fire departments that institute such policies, and a massively funded publicity campaign called “Firewise.” As Audubon magazine put it, “The press and politicians called fire season 2000 ‘a natural disaster.’ The fires were natural, but the ‘disaster’ was how much the United States spent to fight them.” San Diego landscape architect Jon Powell declares that in many places “the fire marshal has become the only land-use authority.”

Clearly, such regulations severely limit or prohibit many standard landscape practices. Of much greater concern is the sustainability effect of so much clearance and prohibition of native vegetation. Typical clearance requirements, applied to a 2,500-square- foot residence and quarter-mile-long rural driveway, removes most vegetation from over 1.25 acres. In an average-sized county, total annual fire clearance could be over 45 square miles, or nearly 3 percent of total land area. This amount of clearing would generate enough greenwaste to cover an acre five feet deep (20,000 tons or more), much of it hauled to landfills. The unintended consequences of Firewise clearance requirements are major 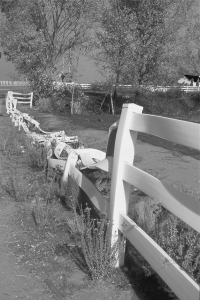 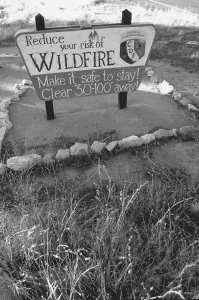 Figure 2.20 The “Firewise” focus on clearing fire-adapted forests merely gives a false sense of security. This sign barely avoided being burned down in the 2002 San Diego–area conflagrations. (Photo: Kim Sorvig.)

In fact, “fuel reduction” is cumulatively the same as deforestation, and has the same effects on regional and global climate. Clearance aimed at fire prevention contributes to drought, making wildfires worse.

What should landscape professionals do? Primarily, work to create regionally specific and well-reasoned fire policies. 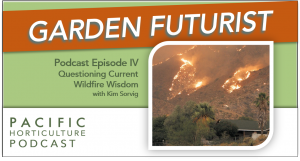 Along with fire-resistant construction, a nontoxic spray-on gel called Barricade has been available since about 2000 that will prevent structures and even trees from igniting. A liquid concentrate is applied about one-quarter inch thick with a garden-hose sprayer, without need for special protective clothing. Demonstration videos show it stopping half a plywood shed, and one of two adjacent evergreen trees, from burning. After the fire, the gel rinses off. The company states that it will not damage sound paint, and can actually clean old paint. The required 30-gallons per minute (gpm) is more than some wells can supply; some users have installed secondary systems for firefighting. The concentrate has a guaranteed three-year shelf life, and will last longer if vigorously shaken every six months.

Wuerthner points out that fires are like floods: many small ones occur each year with little damage, but the “100-year fire” is also inevitable in fire-adapted eco- systems. In a given year, one or two “megafires” account for 90 percent or more of acreage and structures burned, says Wuerthner. Policy and design for development in fire-adapted landscapes need to acknowledge this distinction. Controlling the many small fires is feasible. Stopping megafires is possible only, if at all, with what a contributor to Wuerthner’s book calls the “Fire-Military-Industrial Complex.”

Because clearance is costly, environmentally destructive, and often entirely ineffective against wildfire, landscape professionals should resist fire ordinances that rely primarily or exclusively on vegetation removal. Ultimately, clearance is politically expedient, giving the appearance of preventive action, but creates a false sense of security. (See Figure 2.20.) Fire-resistant construction plus forest restoration is by far the more sustainable goal, and one that landscape professionals should advocate.

Benoit Mandelbrot, The Fractal Geometry of Nature, updated ed. (New York: W. H. Freeman, 1983). Although many other books (and movies!) have built on Mandelbrot’s work, this remains a classic explanation of a truly revolutionary new discipline. See esp. chapter 1, “Theme”; for a straightforward graphic that explains the concept of fractals, see the Koch snowflake illustrations on pp. 42–44.

“Wild” is another difficult term. Most places on Earth are in some way influenced by human management, politics, pollution, or preservation. In this sense, no place is pristine. This fact is not, in my view, an excuse for failing to preserve those places that are closest to being wild, those that are most nearly self-sustaining. It is not the romance of being untouched that makes these places important, but rather what they show about the dynamics of biodiversity and how they preserve diversity lost elsewhere. Further discussion in Kim Sorvig, “Nature/Culture/Words/Landscapes,” Landscape Journal 21, no. 2 (2002): 1–14.

See www.ftc.gov/enforcement/rules/rulemaking-regulatory -reform-proceedings/green-guides. Green Guides are properly known as “Guides for the Use of Environmental Marketing Claims” (www.ftc.gov/policy/federal-register-notices/guides-use-environmental-marketing-claims-green-guides, 11 Oct 2012). The Guides do not mention landscapes, focusing on claims of nontoxicity or recycled content in products. Odds are the Trump administration will kill the Guides if they notice their existence.

The exhibition catalog, by the same title, is available from Princeton Architectural Press.

Pacific Horticulture members receive a 25% discount on all Island Press publications. Members can find the code in our Member Portal.