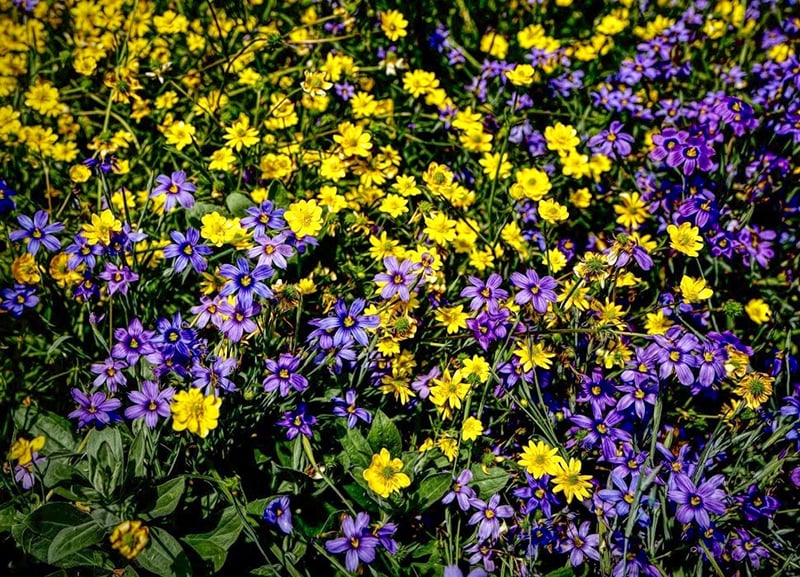 The floor of the Sacramento Valley is mostly flat agricultural land veined with a network of creeks, sloughs, levees and dams, all constructed to collect and direct winter rainfall. Along such a slough is our one-acre private native garden begun more than 15 years ago by myself, Patricia, and now enjoyed and managed in a wonderful partnership with Pat.

Each year we look forward to a long spring, usually about four months, with many changes. We have always celebrated two spring seasons, early and late, because they are so very different. Early spring, roughly February and March, is still cold and rainy with frosts. Plants are mostly growing but the bloom is just beginning. By late spring, about April and May, weather becomes warm and pleasant with little rain. This is when the spring peak bloom occurs and the succession progresses quickly, making daily walks especially rewarding. Of course, there is some overlap in the plants blooming in each spring season, but generally plants will fall in one or the other. We have found that as plants become established, they tend to bloom earlier in the season.

For Pat and me there are two signals that early spring has arrived. The first, in most years, is the annual redmaids (Calandrinia menziesii) highlighting our sunny Valley grassland with a pink carpet. This is mixed with clumps of June grass (Koeleria macrantha) and swaths of two perennials: blue-eyed grass (Sisyrinchium bellum) and California buttercups (Ranunculus californicus) that soon follow. These plants are the foundation of our Central Valley grassland in early spring; they are well established and reliably return or reseed each year. Eventually in the shallow swale, where more water collects, a large patch of common meadowfoam (Limnanthes douglasii) explodes, followed by white meadowfoam (L. alba) a few weeks later. As buds start to form it is easy to identify each species. Iris-leaved rush (Juncus xiphioides) provides a nice vertical contrast. 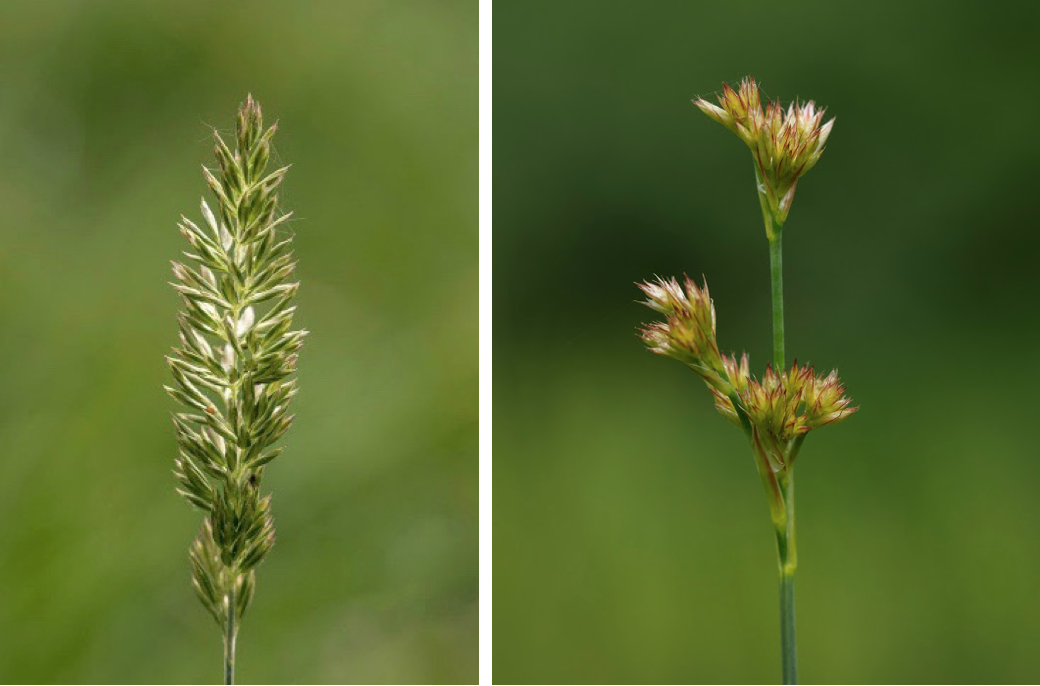 California grasslands are not just grasses. A John Muir quote that has stuck with me is, “Here it is not as in our great western prairie, flowers sprinkled in the grass, but grass in the flowers,” a statement confirmed by many years hiking around the state. Our little grassland was planted in fall 2009 with only 25 percent grasses and the rest forbs. It has been interesting to watch the area expand and evolve over the years, recording how this ratio changes over time. Each year is different as nature does her part to mix, edit and expand these species. Since many native grasses can easily take over, we chose the cool season June grass as the main grass because it is not too aggressive and the flowers are very pretty backlit or swaying in the wind. There was a year that we found the reseeding blue-eyed grass was starting to outcompete the June grass so we encouraged more reseeding by clearing under flopped grass flowers to decrease competition and collected the grass seed to start more plugs for transplant. Of course, we removed lots and lots of blue-eyed grass plants and seeds that were given to other native plant gardeners. Sometimes nature needs a little help. 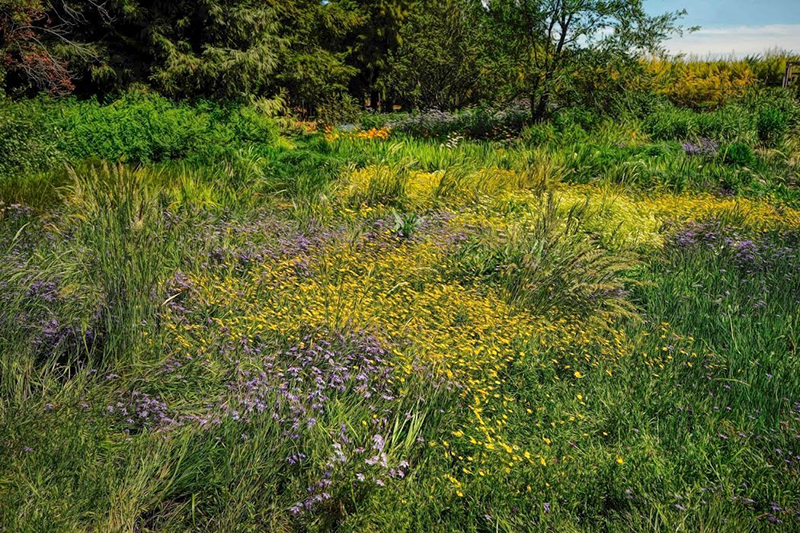 When winter is barely behind us, the second signal of early spring is the blooming of all our native currants (Ribes). We have well over a dozen shrubs in many exposures and microclimates, allowing the bloom to continue for several months. Those receiving more sun bloom first. Usually, the first to bloom is one of our several cultivars of chaparral currant (R. malvaceum), sometimes even starting in winter. At about the same time, on a north-facing slope of the slough where we have grouped our coastal plants, the fuchsia-flowered gooseberry (R. speciosum) begins, often blooming with cool season California melic (Melica californica) and white California poppies. The flowers of the gooseberry make up for the numerous thorns that require great caution when cleaning up around this shrub. 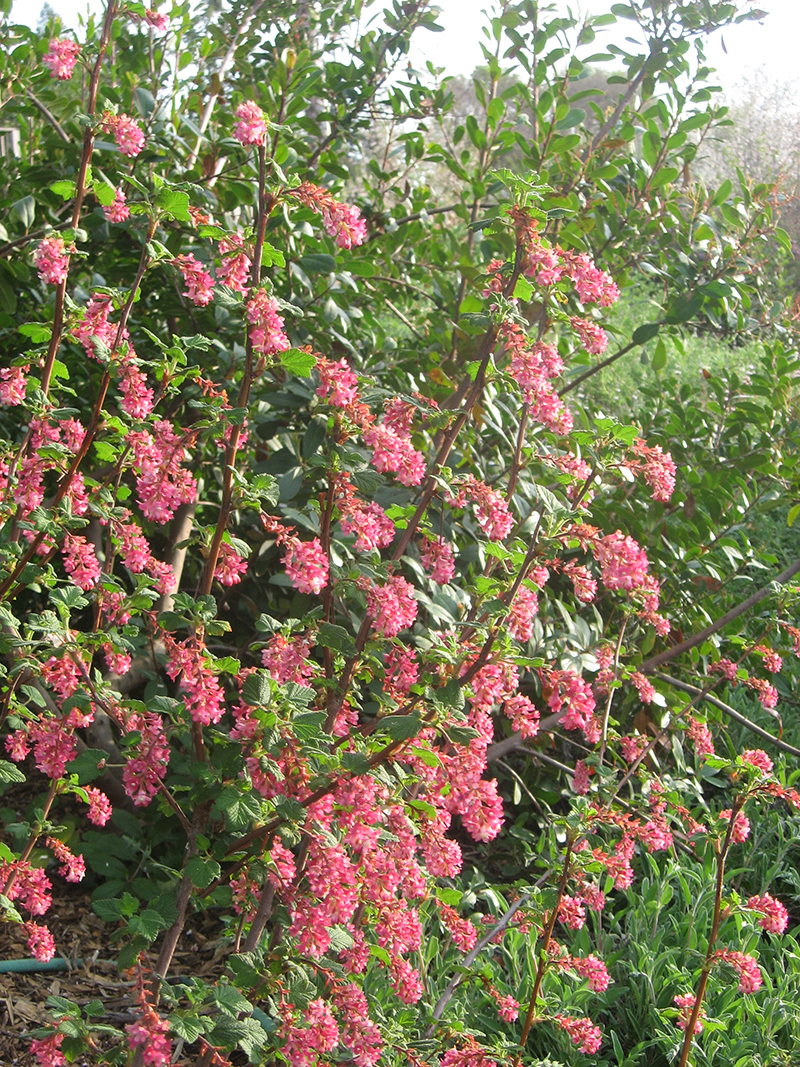 Next are the flowering currants (R. sanguineum var. glutinosum), which come in pinks and white; the cultivar ‘Claremont’ is a favorite. The golden currant (R. aureum) grows in dense thickets and makes a wonderful early spring cut flower. Our only evergreen currant is the Santa Catalina Island currant (Ribes viburnifolium), with glossy green leaves and a lovely fragrance. Native Ribes have edible berries, although they vary in their palatability and preparation required before eating. 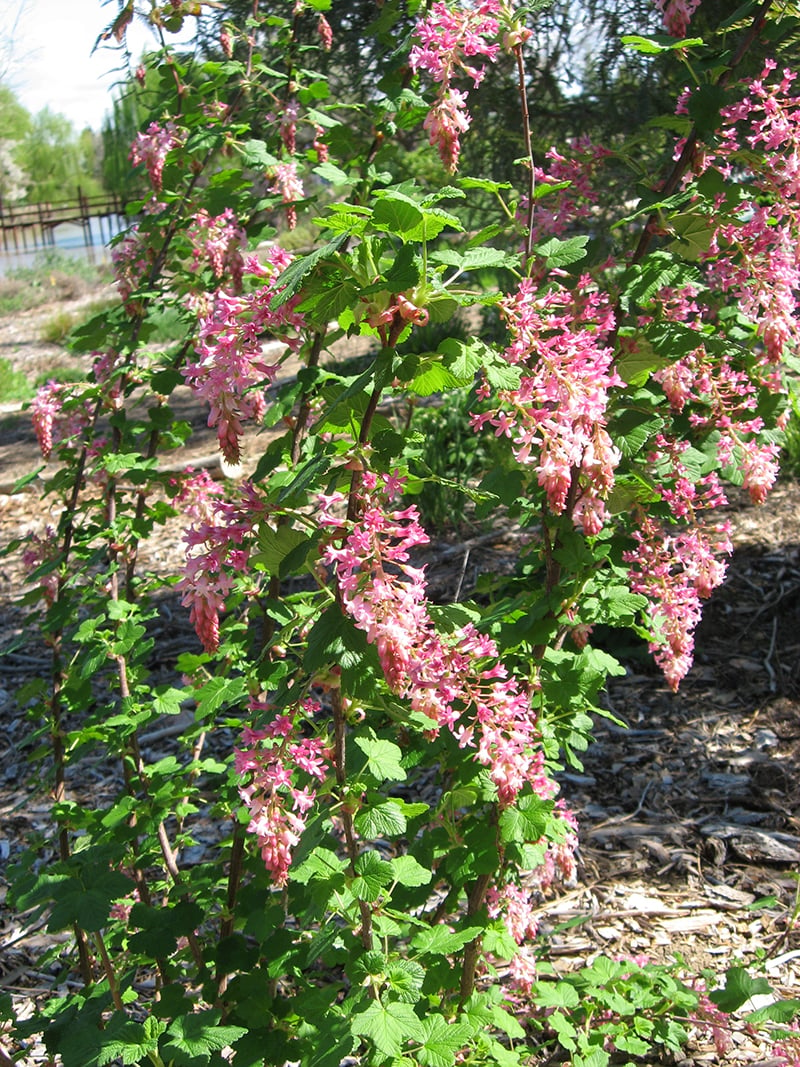 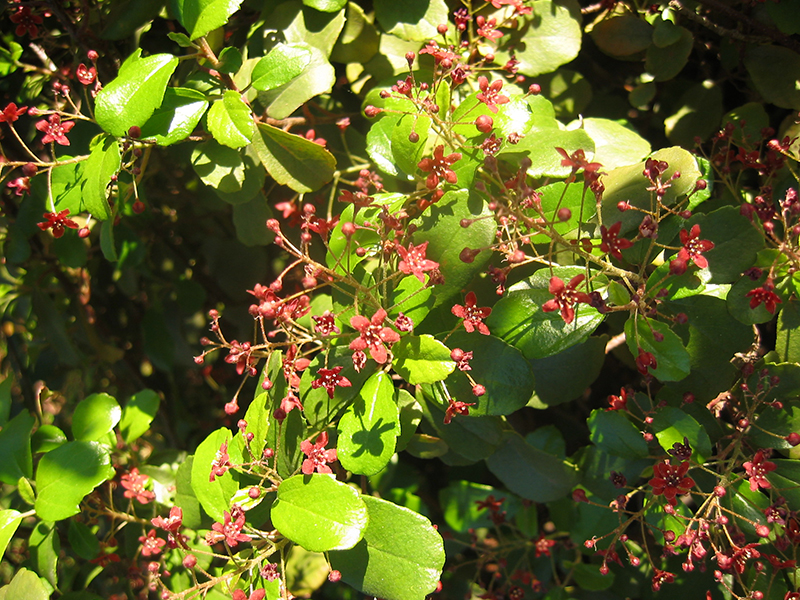 A collection of Ribes can also be found under the Valley oaks near the slough. Establishing plants under large deciduous oaks can be challenging because of the dry shade, seasonal leaf drop and competing roots. Our oaks are only watered every three to four weeks in summer but the roots can also tap into the water in the slough. Catalina Island currant and golden currant, with their spreading roots, help hold the slough bank, are drought tolerant in our clay soil, and also tolerate flooding. 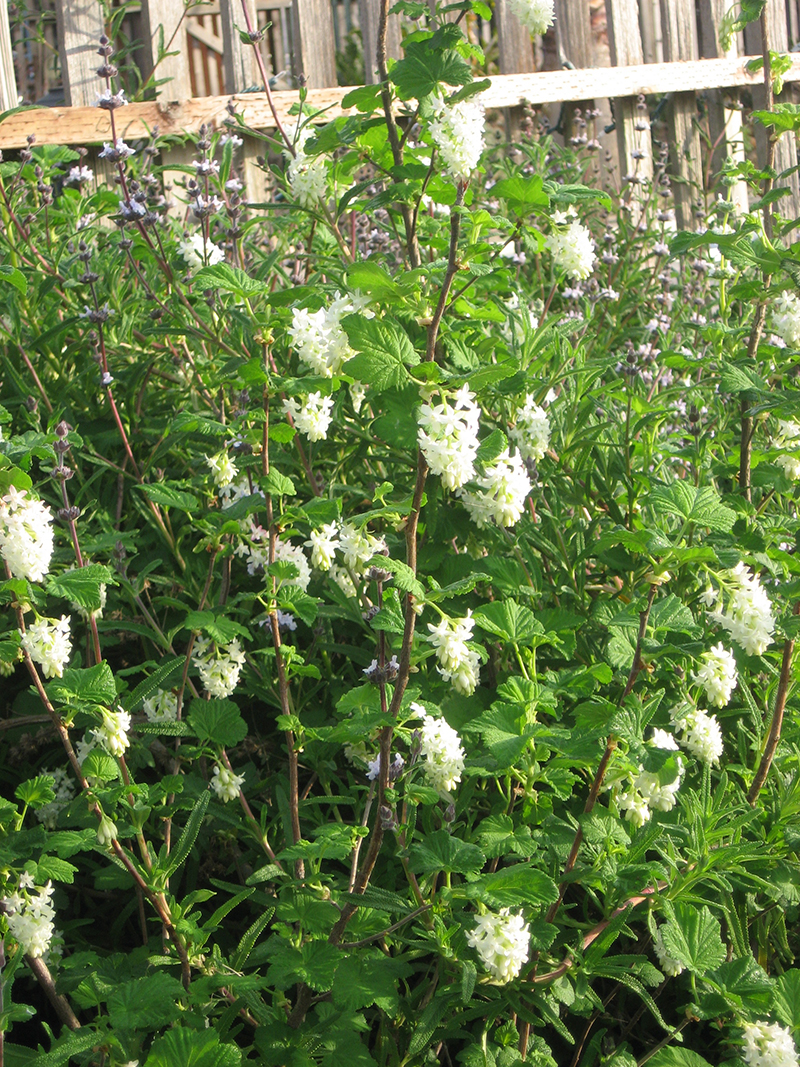 We marvel at the resilience of species that aren’t bothered by the heaps of big oak leaves that come down each fall, smothering everything! We mostly ignore them and one day little sprouts emerge. In early spring for over ten years, the combination of western bleeding heart (Dicentra formosa), Iris Pacific Coast hybrids, California pipevine (Aristolochia californica), hummingbird sage (Salvia spathacea), and annual Chinese houses (Collinsia heterophylla) have returned and expanded under the Valley oaks. Mixed in is a bit of California fescue (Festuca californica) that creeps toward more sun as the oaks grow. The slough banks are now becoming green again, however the big bloom won’t be until late spring. 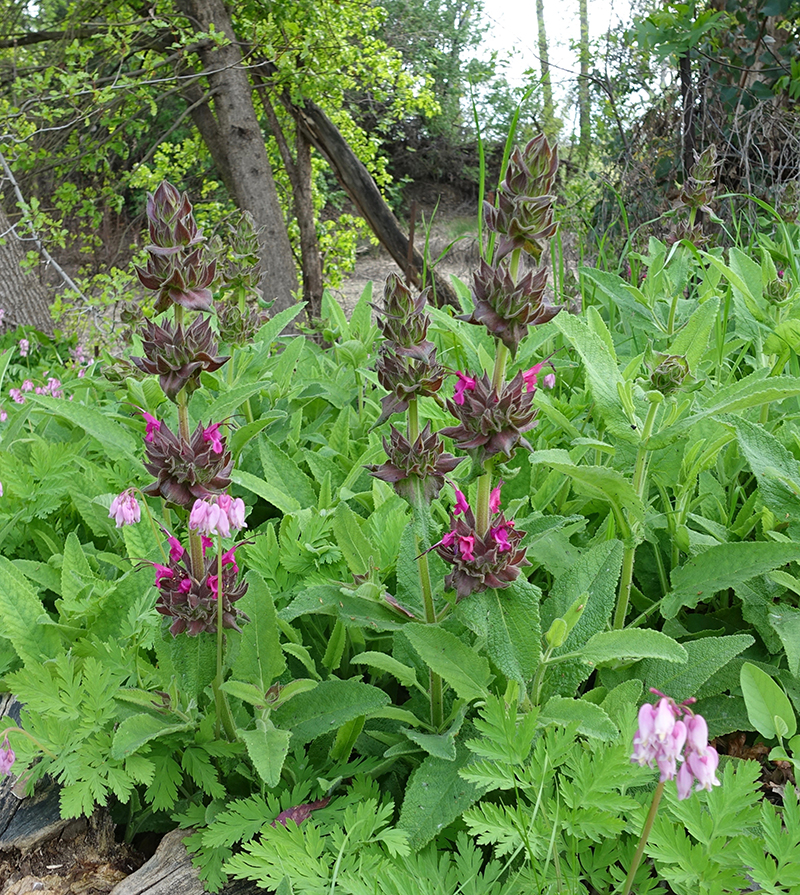 Several recent dry shade additions under the Valley oaks are also proving to be successful. The perennial, summer-deciduous houndstongue (Cynoglossum grande), western meadow rue (Thalictrum fendleri), and gold-back fern (Pentagramma triangularis) easily push through the leaves. And a surprise this year is the returning distinctive seedlings of the annual, blue, fiesta flower (Pholistoma auritum), an oak woodland plant that is more commonly found south of the San Francisco Bay area and to southern California. The delicate blue flower has barbs that grab onto clothing and I have worn them as a native corsage as have others before me. These exciting new seedlings have chicken wire cage pest protection, just in case.

Although pests remain a problem in early spring, water or lack of it is usually more important. Annuals especially don’t want to dry out as they grow. If we have a normal year, by the first of February in our area we have had almost two thirds of our annual rainfall of about 18 inches.  Most of the remainder falls in the months of early spring. After our many years of drought, with research and experimentation, we have learned our lesson. Making up for the lack of winter rainfall during late spring and summer is not advisable for spring annuals or healthy for California drought-tolerant plants. It is important to pay attention to winter rainfall because the native garden may need irrigation in the early spring to more closely represent the rainfall pattern to which our natives are adapted.

With over 400 native species or cultivars planted, we need to keep some records. From the beginning, I have had a database plant list with information on when something is planted, its source, native plant community, and location in our native garden. There are also many notes, including propagation successes and plant losses with reasons if known. We live in the Central Valley but want to grow plants from other California areas as well and these notes help us to figure out if plants from different plant communities can be grown successfully here in our mild winter but hot summer native garden.

The plants in our native garden are grouped by natural habitats—redwood, desert, foothills, oak woodland, coastal, riparian, or Valley grassland. To do this we had to evaluate the sun, shade, slope, aspect, and soil type, which then helped us to better understand drainage and the plant’s likelihood of survival. This information allowed us to find areas in our acre that best match conditions in their native habitats. 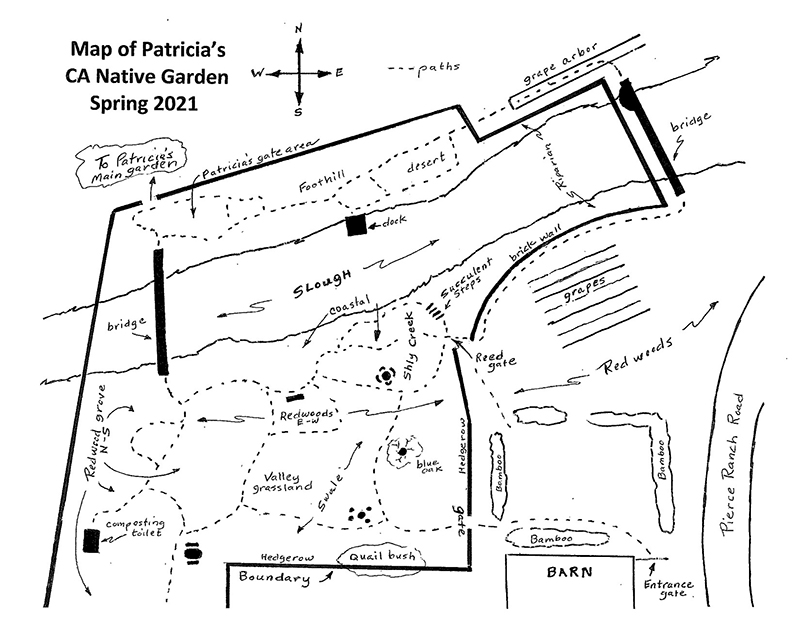 A map of the garden in Spring 2021. Patricia Carpenter

Pat cared for the native garden when I was in New Zealand during the 2012-16 California drought years, an amazing and appreciated commitment! Being scientists, we wanted to know what plants were resilient and thrived during the drought and with Pat’s minimal care; she was absent most of the summer, there was inconsistent irrigation, and little maintenance. When visitors learn of my five year absence they always want to know how the garden fared, what thrived and what didn’t survive.

When I left, Pat was still learning the garden and contents so we quickly assigned a number to each plant species/cultivar and made simple maps of all the garden areas with plant numbers so that we could communicate from afar. I returned yearly for a proper and much needed catch-up and map revisions. These maps are now part of our historical records. 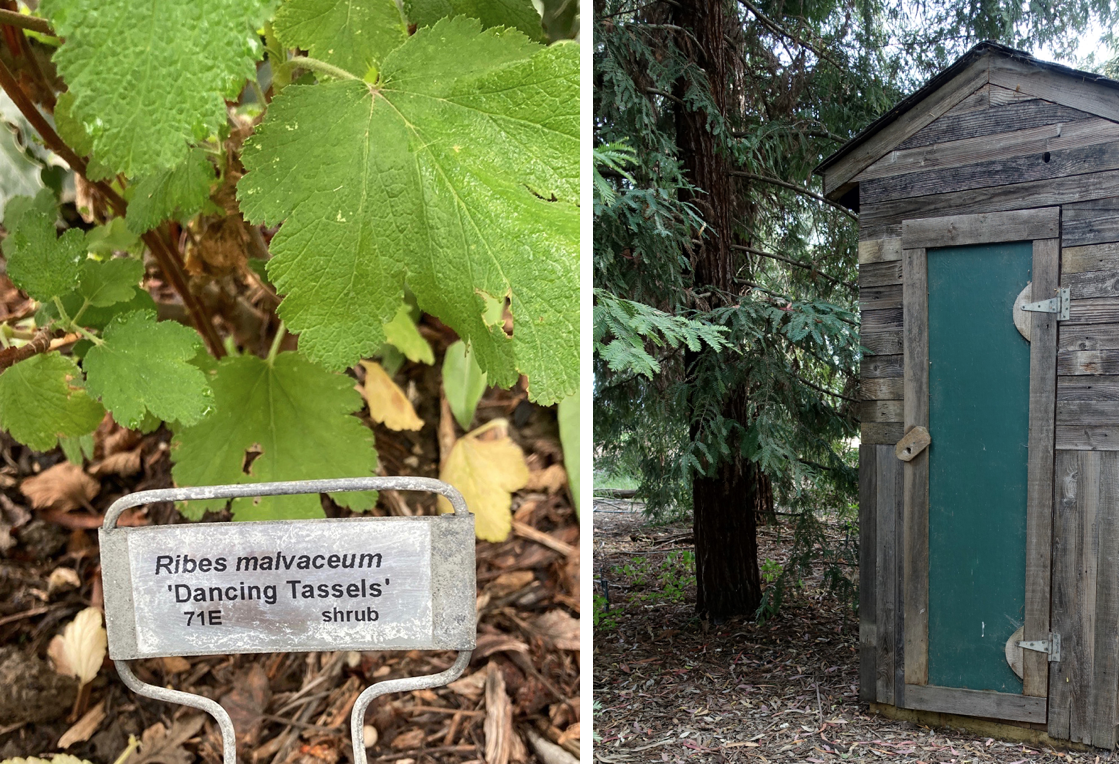 Plant labels are also a great help to us. At first our metal labels were for our needs only and although permanent, were written in pencil and often a bit difficult to read due to our hard water deposits–solved only with a bit of spit or steel wool. Visitors ask many questions about the plantings. The information on the back of labels includes the date planted, size at maturity, source and sometimes notes, because it is easier to answer visitors’ questions about a plant instantly rather than consulting the database. As a backup however, the most recently updated plant list is kept nearby hanging above the workbench behind the rustic tool shed/office that doubles as a composting toilet. Pat designed and constructed the wonderful door and rustic workbench. 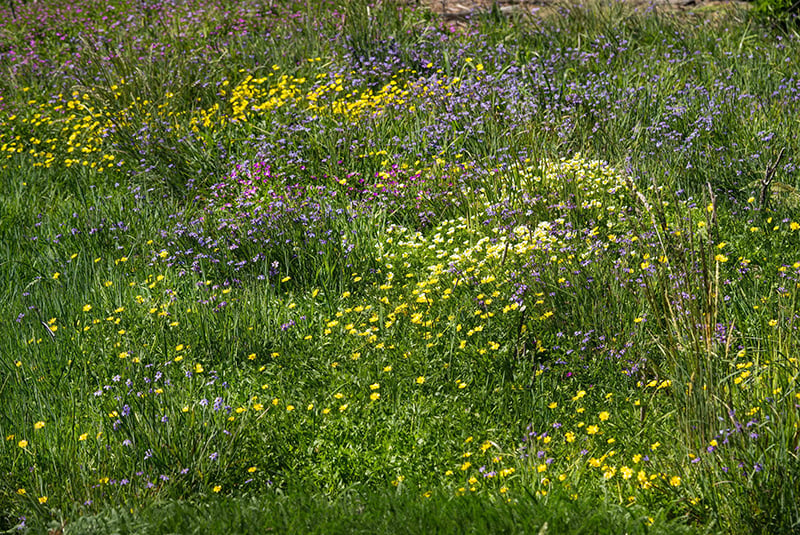 The Valley grassland approaching late spring with the last of the redmaids in bloom (Calandrinia menziesii) and meadowfoam (Limnanthes douglasii). Beth Savidge

As we have had more interns and visitors, in 2018 we started upgrading labels to be easier to read and hopefully still long-lasting. Plant lists always seem to be out of date. Keeping up with records, maps, and plant labels is a never-ending job, best finished in the winter it would seem—but in our mild winters we are so busy that most often they are finished for the year in the lazy hot summer. Just in time for fall planting!

Don’t miss the early spring as it unfolds! Next, we will write of the transition into late spring, a rewarding time for us when we appreciate our successes due to all the work of the previous seasons.