Gary Hammer left this world on August 7, 2011. But our favorite plant collector had already largely disappeared from the Southern California gardening scene before then.

Hammer, as all his friends knew, had a fervent desire to live in Mexico one day. During the first decade of the 21st century he bought property in Orizaba, Veracruz, established a nursery, and began spending more time in Mexico and less in the States.

How does a nurseryman—as we know too well, no one goes into this business to get rich—accumulate enough money to buy several acres in Mexico? His industry, for one thing. “Gary was the hardest-working person I ever met,” says John Greenlee, ornamental grass nurseryman. Secondly, thrift. Gary was notoriously frugal. Well, let’s be honest, cheap.

“We used to tease him his van was so old you could see the stripes on the highway through the floorboards,” says Steve Brigham, former owner of Buena Creek Nursery in north San Diego County. Nor did Gary waste much money achieving sartorial splendor.  “T-shirt and shorts only, always,” says Greenlee.  “And for a long time, no shoes.” Food was mostly there for fuel. “He loved Fat Burgers,” says Brigham.  “I think because it provided the most calories for the least money.”

We have a glimpse of what Gary’s life was like in Veracruz thanks to plant broker Matt-Dell Tufenkian who accompanied Gary there on a plant collecting tour  in 1999 and took the snapshots we’re sharing here. Gary was toying with an eco-tourism idea—inviting horticulturally inclined guests to join him on collecting treks, says Matt. “And I was his guinea pig.” 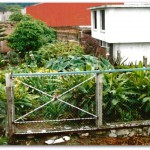 These were Gary’s living quarters and growing grounds in Orizaba, Veracruz. Because it rains virtually every day there, says Matt, Gary didn’t need to put in any irrigation. “The sky provides all the water you need.” 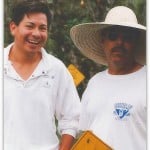 Gary with his significant other, Louis Enrique Gonzales Luna. 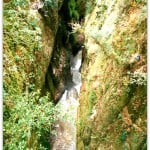 Veracruz is full of chasms like this one and Gary explored them. He fell from one while attempting to collect a bromeliad and broke his leg so badly the local doctors thought amputation was the only answer, says Brigham. Gary, though, managed to get himself airlifted to the States. But, says Brigham, it took several operations, lots of metal, and several years before he could walk well again. 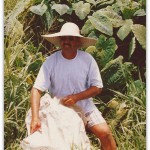 Gary harvesting elephant ears (Alocasia) This harvesting scene looks comparatively innocent, but those elephant ears are growing in a sewage drainage channel. “Unfortunately that’s where a lot of the best plants were found,” says Matt. 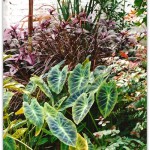 The same kind of tropical plants in a more attractive setting—Gary’s growing grounds. 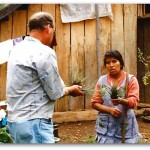 Gary didn’t do all his collecting himself, says Matt. He’d take a sample of what he was looking for and engage locals in gathering more of the same. Here he’s showing a local woman what looks like a tillandsia.

Lobster claw (Heliconia) was not the most successful plant Gary introduced to Southern California. Loved them, lost them, said virtually everyone who tried them. But they had smiles in their voices when they said it. Pushing the limit was what Gary Hammer was all about after all, and trying his plants was sharing in the adventure. Many thanks to Matt-Dell Tufenkian for digging these photos out and passing them along. 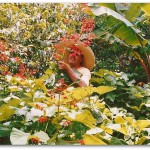