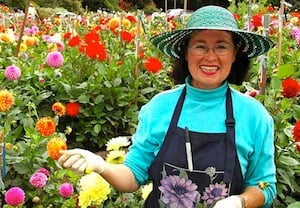 The Dahlia Society of California invites you to a docent-led tour of the Dahlia Dell in Golden Gate Park. This is your chance to get dahlia questions answered, including their culture, history, and more. The Dahlia Dell is located down the steps on the east side of the Conservatory of Flowers. It includes over 600 dahlia plants and is open to the public free of charge.

In addition to this tour, the Society also hosts its annual show in San Francisco’s Golden Gate Park at the County Fair Building the weekend of August 18 and 19 (see that separate listing). The show includes upwards of 3000 magnificent dahlia specimens, each labeled for your enjoyment and photographs. See first hand why the Dahlia is the official flower of the City of San Francisco

Both are programs of the Dahlia Society of California.

Have questions?  Send them via email.

Both the Dahlia Dell Tour and Show are free.