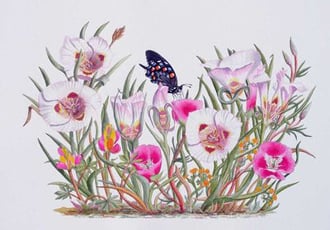 Patrick O’Hara’s Art of California Natives: Selections from the Santa Barbara Botanic Garden  will feature a solo exhibition of his wildflower watercolors and porcelain sculptures commissioned specifically for the Santa Barbara Botanic Garden in 2006. A native of Cork, Ireland, O’Hara studied botany, zoology and geology before attending Malvern School of Art in the late 1960s. His botanical art is represented in museums and private collections around the world, including the National Museum of Ireland, the American Museum of Ceramic Art, Richmond Botanic Garden in Virginia, the National Band of Dubai, GlaxoSmithKline Corporation, and the Flagler Museum in Florida.