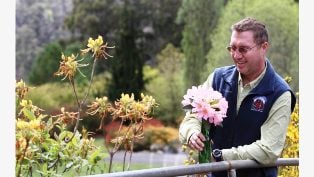 The Bloedel Reserve welcomes Steve Hootman, Executive Director & Curator of the Rhododendron Species Botanical Garden.  Bloedel boasts a huge collection of rhododendrons, and there is no one better around to give an overview and talk about this beautiful and enticing genus.

After the lecture, Mr. Hootman will be available to answer questions and lead a short walk through Bloedel’s amazing Rhododendron Glen.