Watch our Landscapes of Change video about The Potrero Hill Eco-Patch here.

Sheet mulching proved to be a highly effective herbicide-free tool for weed management. We would recommend it for anyone wishing to convert a lawn or weedy area to planting. Sheet mulching is a process where you layer compost, cardboard, and wood mulch over the existing ground months in advance of planting. The materials decompose over time, adding organic matter to the soil, and then plants can be planted directly through the mulch into the amended soil. The proportions we used for the Eco-Patch were a half-inch compost layer directly on to the ground, a layer of cardboard with any staples or tape removed, another half-inch of compost, then three inches of wood mulch on top. These quantities were successful for the shrub planting, but the thick layer of wood mulch made planting grass plugs difficult. For grass plugs we recommend using either a thinner layer of wood mulch, removing the mulch before planting, or waiting longer before planting to enable the wood mulch to decompose further. 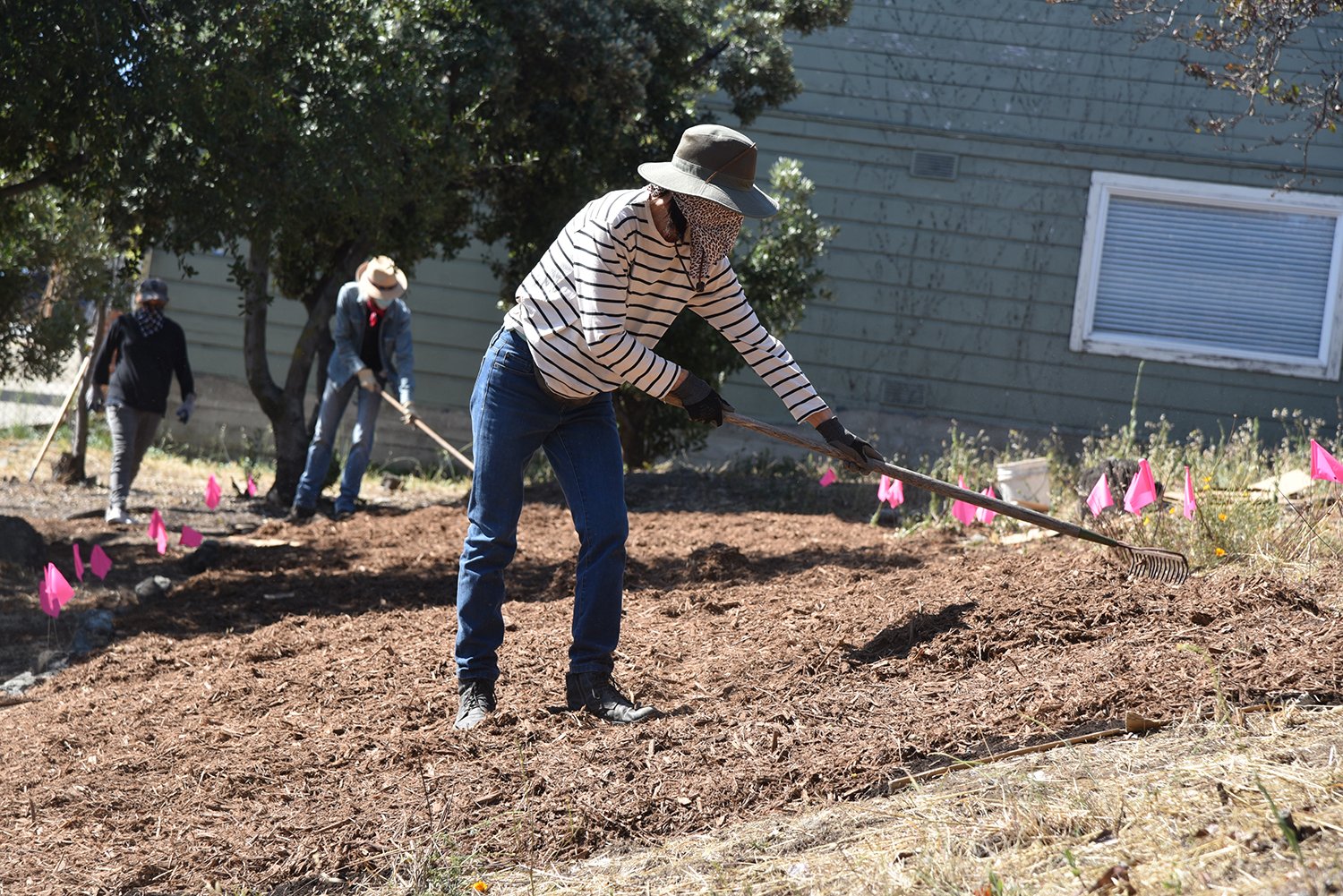 The weed management category of sheet mulching with the addition of filler seeds was a worthwhile experiment. The plants in the filler category made for beautiful additions to the mixes, however the question of whether they acted to suppress weeds above what the sheet mulching was already accomplishing requires further observations and experimentation.

The solarization method was not successful in the traditional sense. Rather than baking the soil to kill the weed seed, the plastic acted as a greenhouse and encouraged germination.  Our hypothesis is that the clear plastic we used, although successful inland, did not generate enough heat in our foggy coastal environment (University of California Integrated Pest Management 2020). If we were to attempt solarization again, we would try with black plastic, which might be more successful. Incidentally, solarization still helped to achieve weed mitigation through “grow and kill.” After a lengthy weeding session to remove the weeds once the plastic was lifted, the solarization plots haven’t experienced any noticeable difference in weed quantities. However, the plots that were sheet mulched have superior soil structure to the solarization plots, likely because of the tillage required as part of the solarization process. 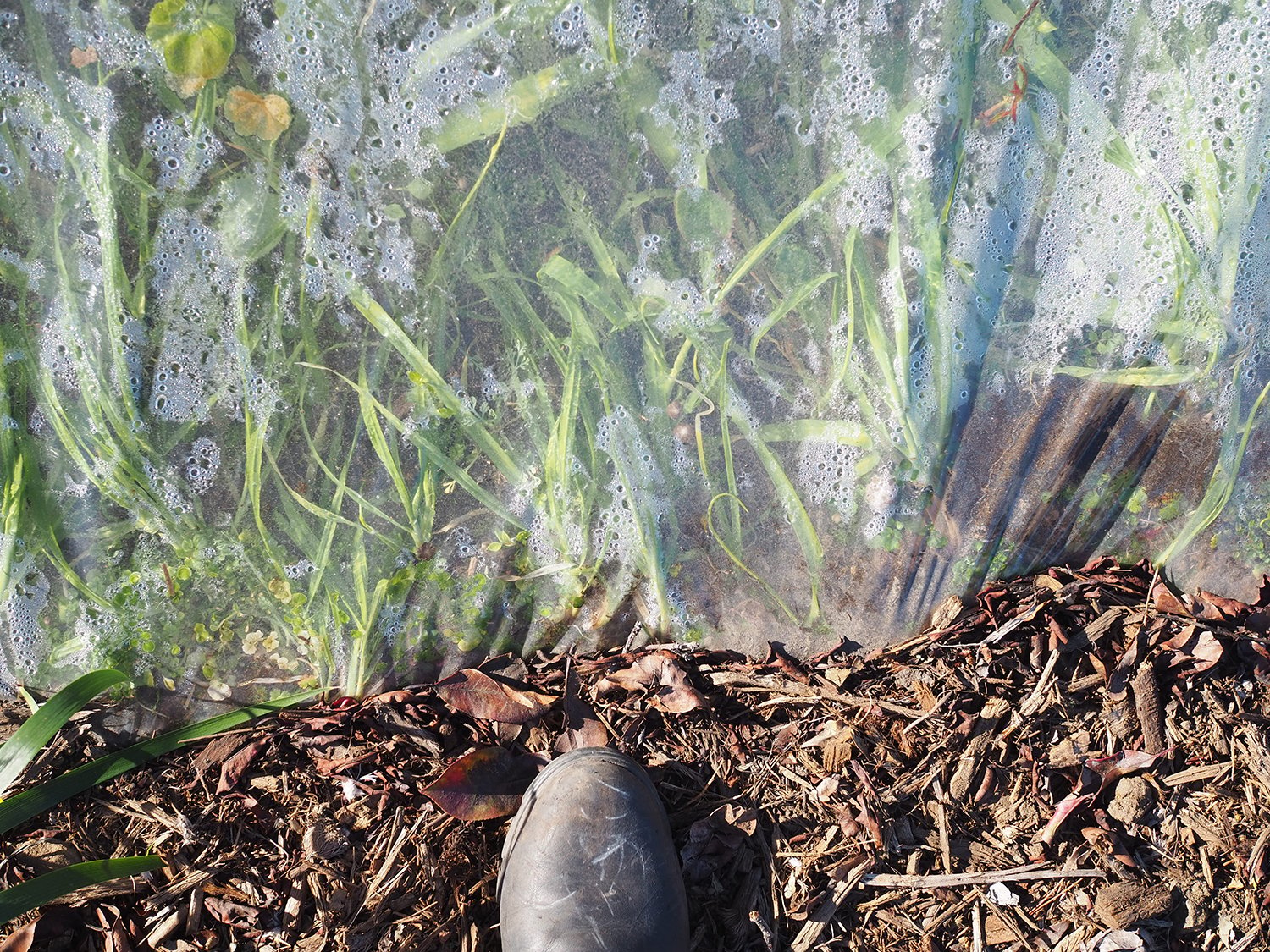 Rather than baking the soil to kill the weed seed, the solarization plastic acted as a greenhouse and encouraged germination. However, it inadvertently allowed us to do a “grow and kill” method of weed management.

While we suggest looking to the wild for inspiration, as we did with our archetypes, we recommend simplifying and limiting the number of plant species to less than you might find in the wild. That way, at a garden scale, repetition in shape, color, and texture can be read clearly.

Sequential blooming was a facet of the more successful mixes—both in terms of aesthetics and habitat value. The bloom times we experienced are specific to the location and microclimate of the Eco-Patch but provide a good starting point for developing your own mix.

Left: In April, the blooms for the miniature lupine (Lupinus bicolor) and manycolored lupine (Lupinus variicolor) dominated the plot. The fern-like foliage of the dune gilia (Gilia capitata ssp. chamissonis) and the slightly tomentose blue-green leaves of the coyote mint (Monardella villosa) are visible but those plants are on the cusp of blooming.
Right: In early May, after the lupines had gone to seed, the dune gilia (Gilia capitata ssp. chamissonis) began to bloom. Its foliage intermingled beautifully with the yet-to-flower coyote mint (Monardella villosa).

Left: Later in May, as the dune gilia (Gilia capitata ssp. chamissonis) began to go to seed, the coyote mint (Monardella villosa) began to bloom.
Right: The bulb Ithuriel’s spear (Triteleia laxa) bloomed in June after all the other flowers had begun to seed, and the bright blue-purple flowers really pop against the California field sedge (Carex praegracilis) and prairie junegrass (Koeleria macrantha). 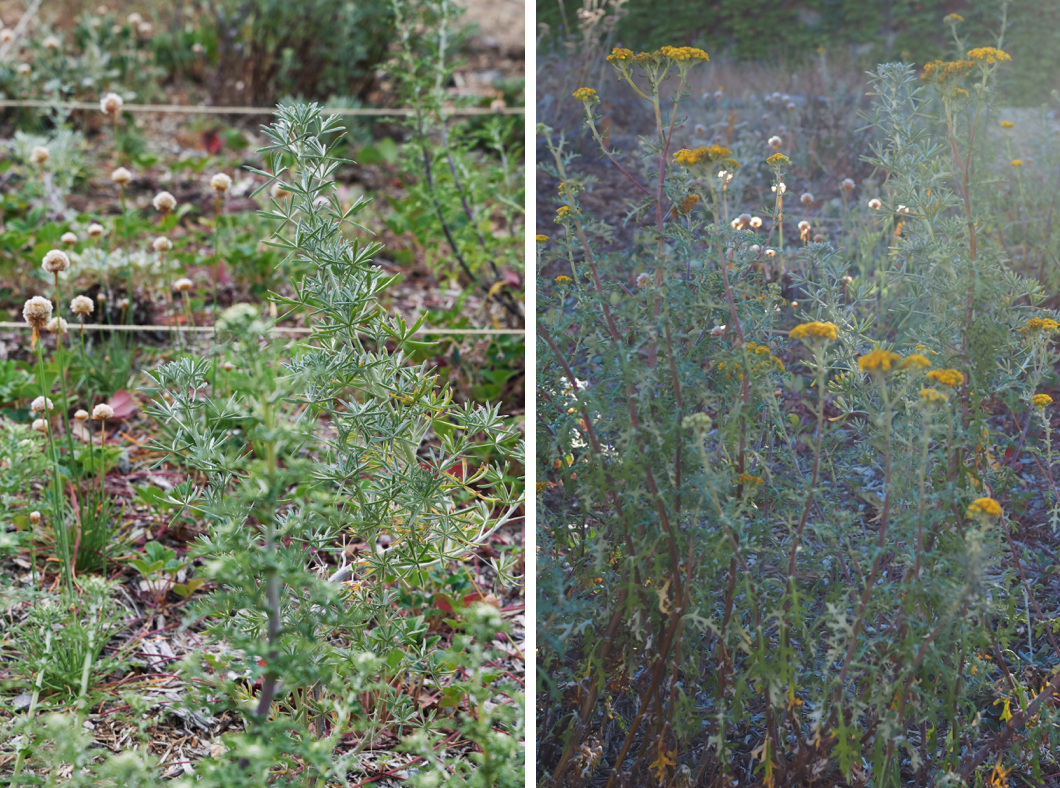 It was helpful to observe what plants got the most attention from wildlife throughout the year. We observed the sequence of plants across different mixes that most attracted the native yellow-faced bumblebee (Bombus vosnesenskii). California scorpionweed (Phacelia californica) was an early favorite. As the California scorpionweed began to go to seed, the dune gilia became a popular destination. As the dune gilia started going to seed, the coyote mint got more attention. We encourage gardeners to make those observations about sequencing blooms for wildlife in their own yards, as it will vary based on their location and microclimates. 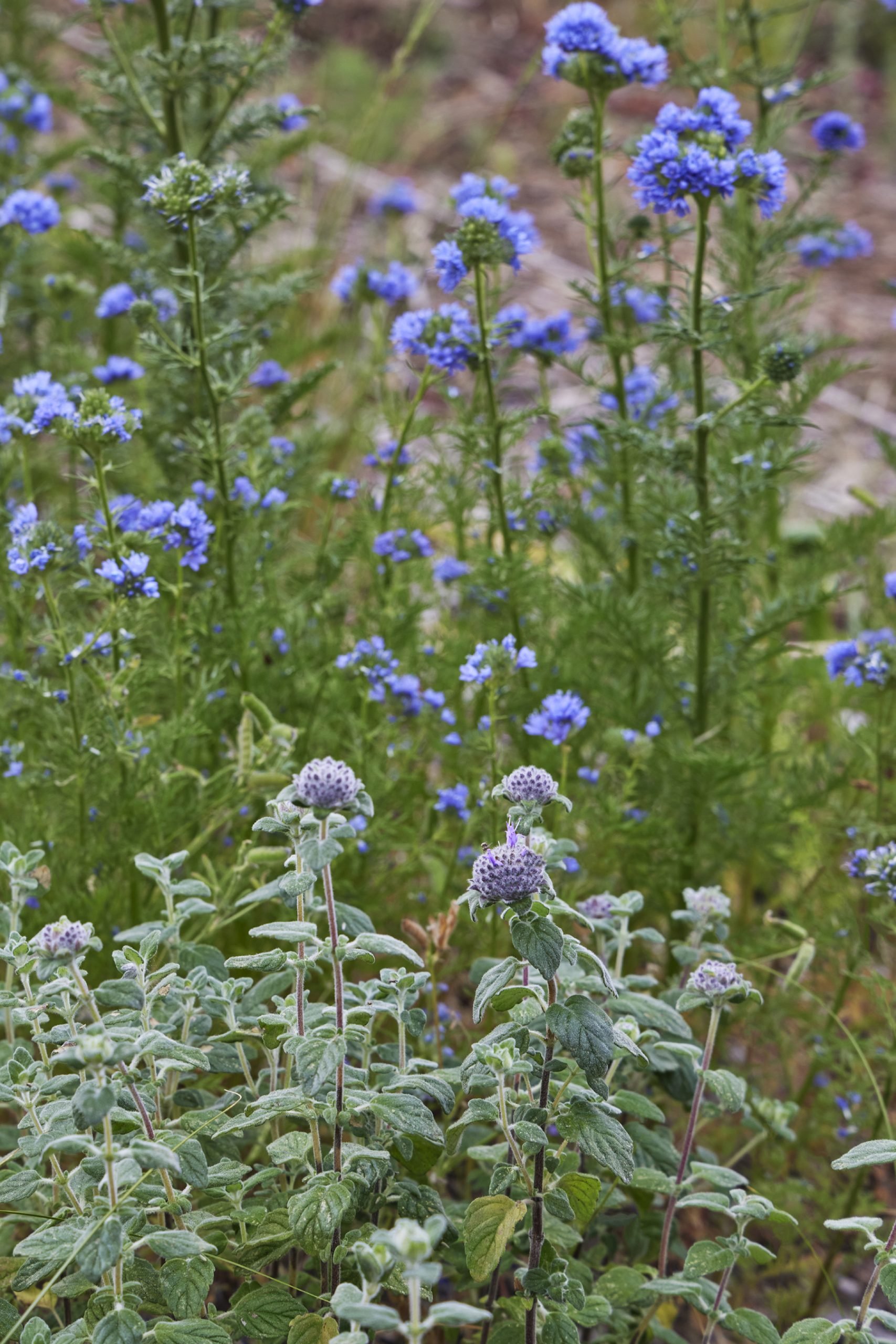 There is a great diversity of native California bunchgrasses. Native California bunchgrasses have extensive fibrous root systems that sequester carbon in the soil (California Native Grasslands Association 2021). While several of the mixes included bunchgrasses for structure and transitions between other plantings, we found that they really stood out in their ability to capture light. Here are some examples of bunch grasses with inflorescences that were able to transform the garden with the way light filtered through them. 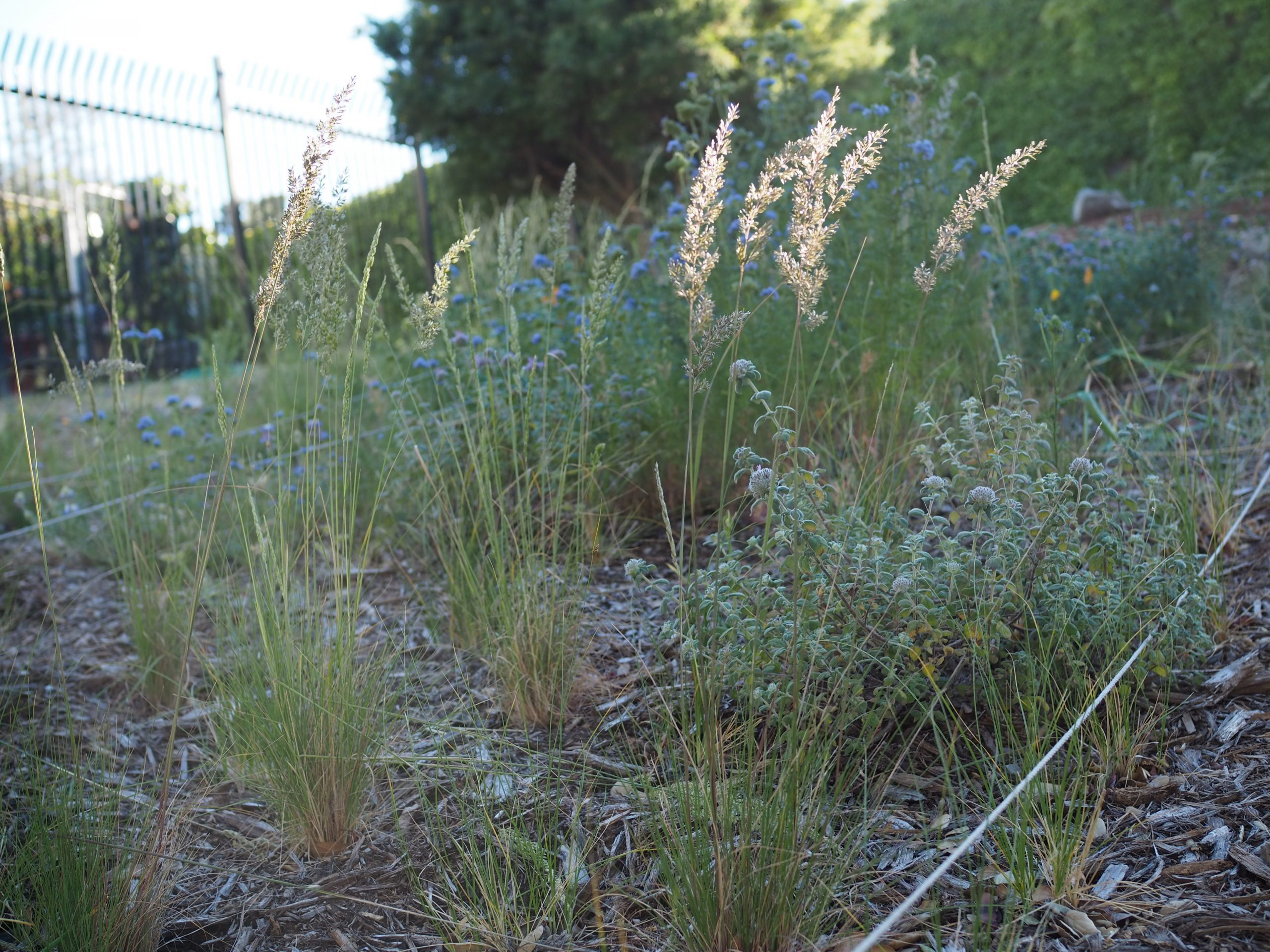 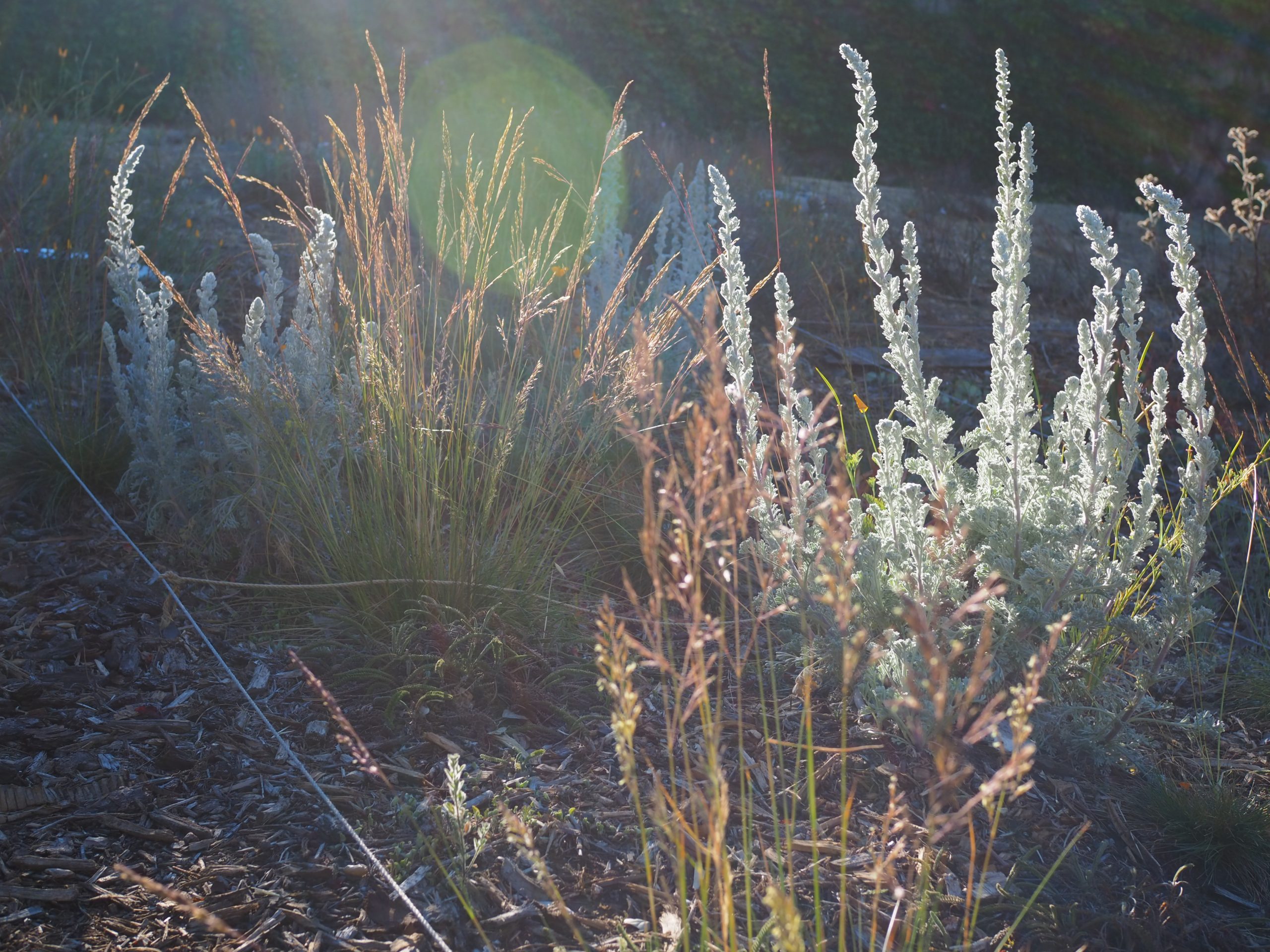 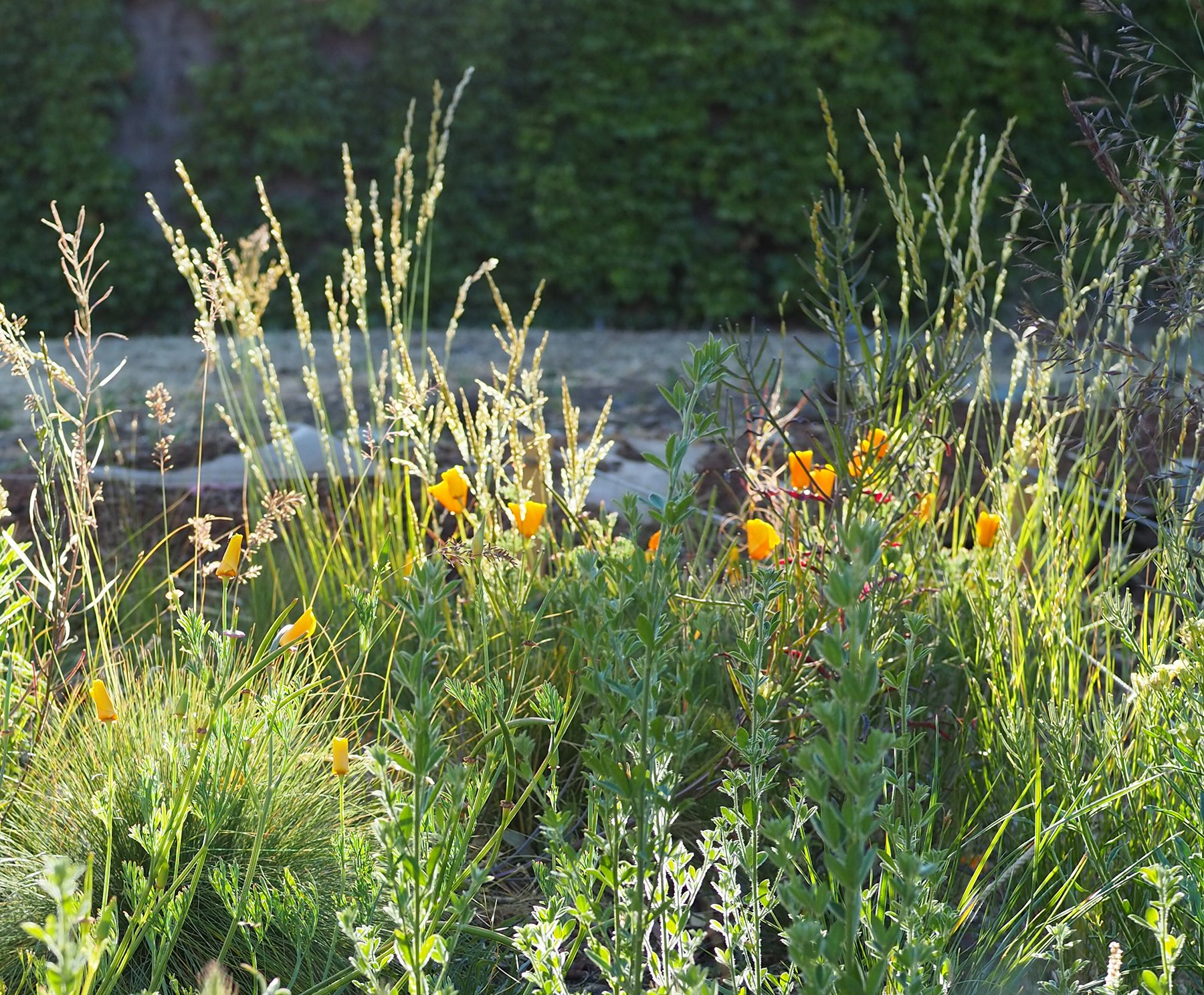 Use of evergreen groundcovers

When testing plant mixes, we wanted to find which regionally native plants could provide fast-growing and evergreen groundcovers. The groundcovers were critical to the success of a mix because they help suppress weeds and provide an evergreen foundation as a base for seasonally dormant plants. The best groundcovers are shade tolerant—as they might be shaded by larger and taller plantings—and are ideally rhizomatous so that they spread to fill in any gaps. From our initial observations, beach strawberry (Fragaria chiloensis) and yerba buena (Clinopodium douglasii) were two groundcovers that stood out as particularly promising. 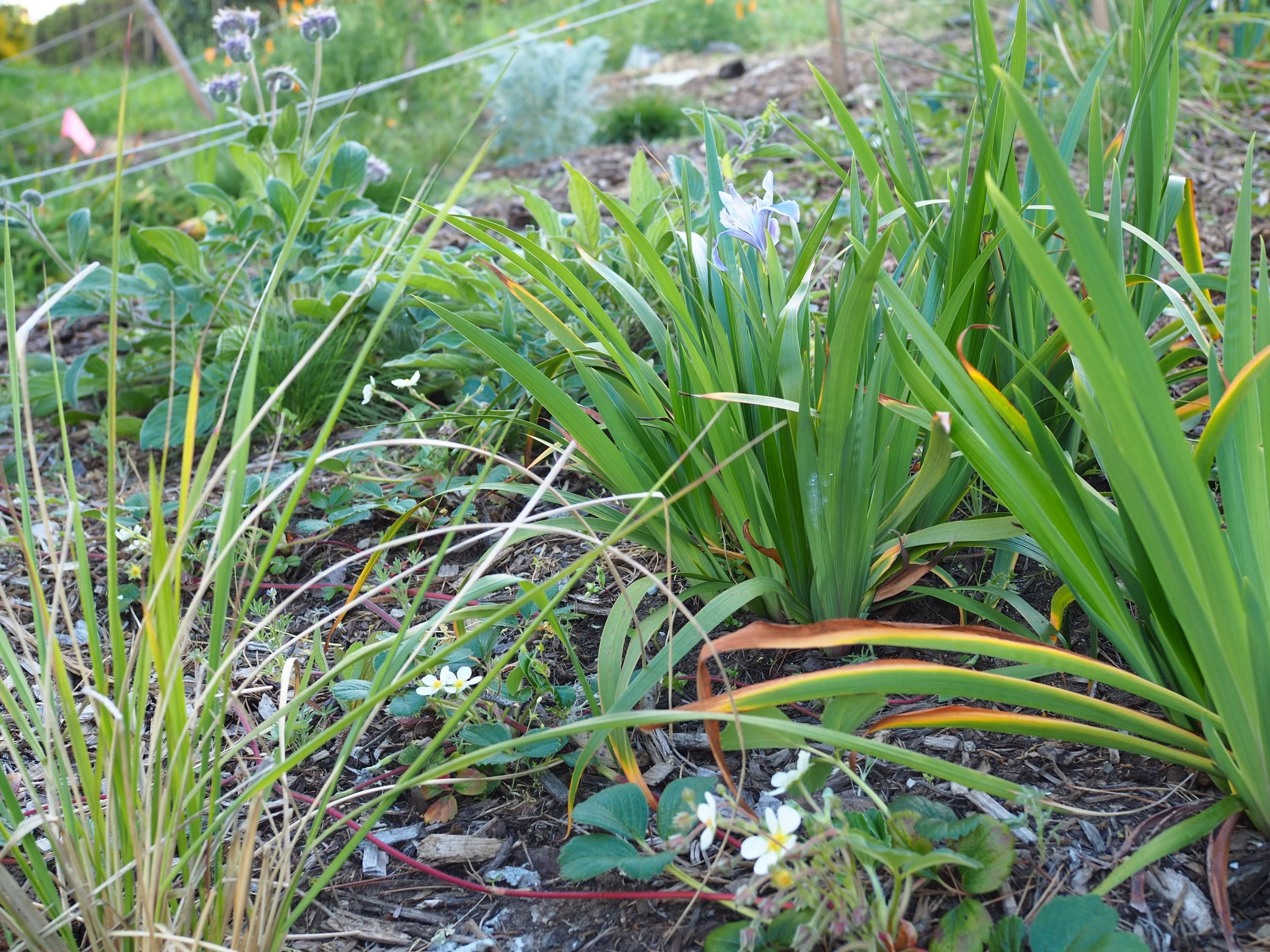 Many native plants that shine during certain parts of the year are inconspicuous at other times. One such plant is the nude buckwheat (Eriogonum nudum), thus named for its sparse foliage. We put it in a mix with shrub-like plants, however upon seeing it flowering, we see that the delicate-looking branching structure and inflorescences would look spectacular emerging from a matrix of grasses. This plant in particular was difficult to source from nurseries but has much potential for habitat and beauty. 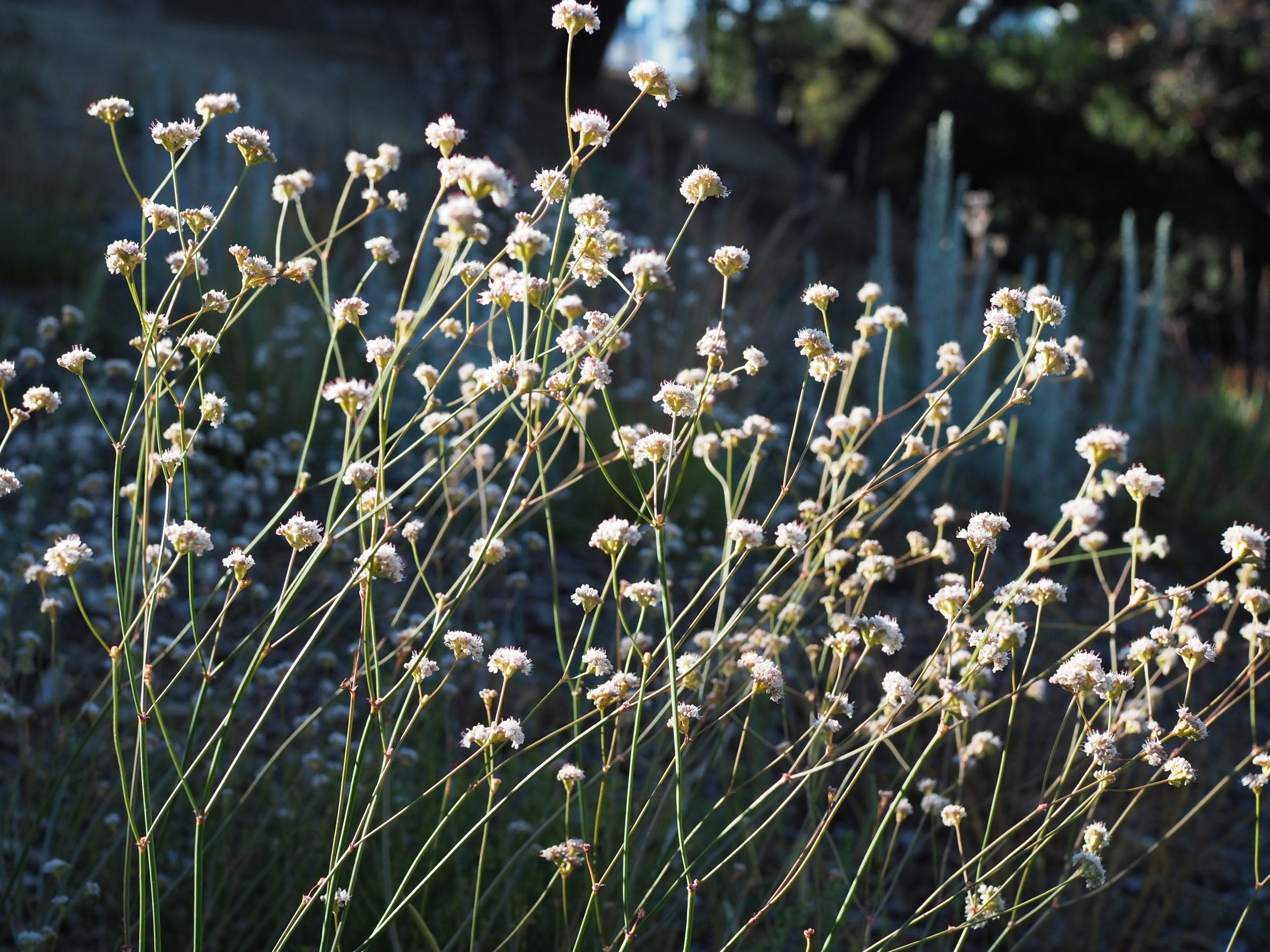 Our approach focused on engaging the community in design and installation. A sign on the fence welcomes everyone who is interested in joining our efforts. We are certain the long-term success of the garden will depend on community stewardship. Beyond installation and maintenance, we are inviting the community to join us in the process of monitoring and observation using the citizen science app, iNaturalist. iNaturalist allows us to track our own data as well as incorporate others’ observations. Using data collected on iNaturalist, we can monitor the presence of wildlife within a quarter mile of the site. It also allows us to collect neighborhood-specific phenological data about plants that we can use to further fine tune our plant mixes for aesthetics and habitat value. We can take notes about our process and keep track of watering and maintenance efforts using the journaling feature on iNaturalist.

Using iNaturalist as a citizen scientist is just one avenue for citizens to affect change. The simple act of planting natives in a home garden can have a wide reach. Not only does it improve local biodiversity, it also sends the message to nurseries that natives are in demand. More native plant consumers will hopefully translate to more widely available native plants. Additionally, city meetings offer another avenue to advocate for more native planting in public spaces.

Although San Francisco natives have been the primary plants of discussion, residents outside of San Francisco can also become powerful allies in the crusade to improve biodiversity: run an internet search for local native plant demonstration gardens, and  your local municipality may have plant lists detailing native plants that are appropriate to your area. For California residents, Calscape is an invaluable tool. 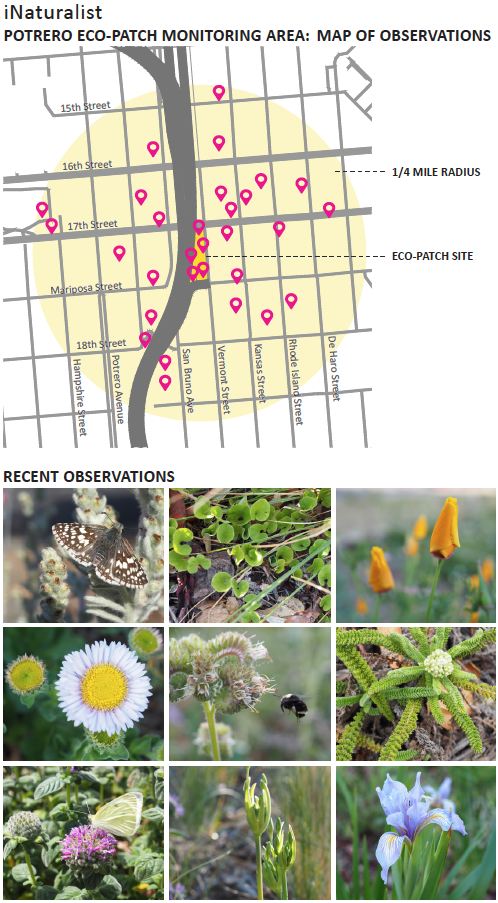 The Eco-Patch team is inviting the community to join us in the process of monitoring and observation through the citizen science app, iNaturalist. Through data collected on iNaturalist, we can monitor the presence of wildlife and plant phenology within a quarter mile of the site. This diagram shows how to view recent observations within the Eco-Patch monitoring area using the iNaturalist interface. See also: Potrero Eco-Patch Monitoring Area: iNaturalist.

Several of the plants we wanted to test in the Eco-Patch either weren’t available at nurseries or were only available in bulk. We believe there is a professional responsibility for landscape architects to aid local biodiversity wherever possible by including a genetically diverse range of regionally native plant species in projects, yet in our experience many species aren’t readily available. In sourcing plants with local ecotypes for the Eco-Patch, we had to use multiple nurseries, yet in Germany people can buy all the plants from a chosen plant mix as a single product. How could this European model be applied to a California context? We are excited by the CPNS “Bloom! California” campaign that aims to boost the sale of a select range of California native plants in nurseries over the next three years. This is a very encouraging step in the right direction. 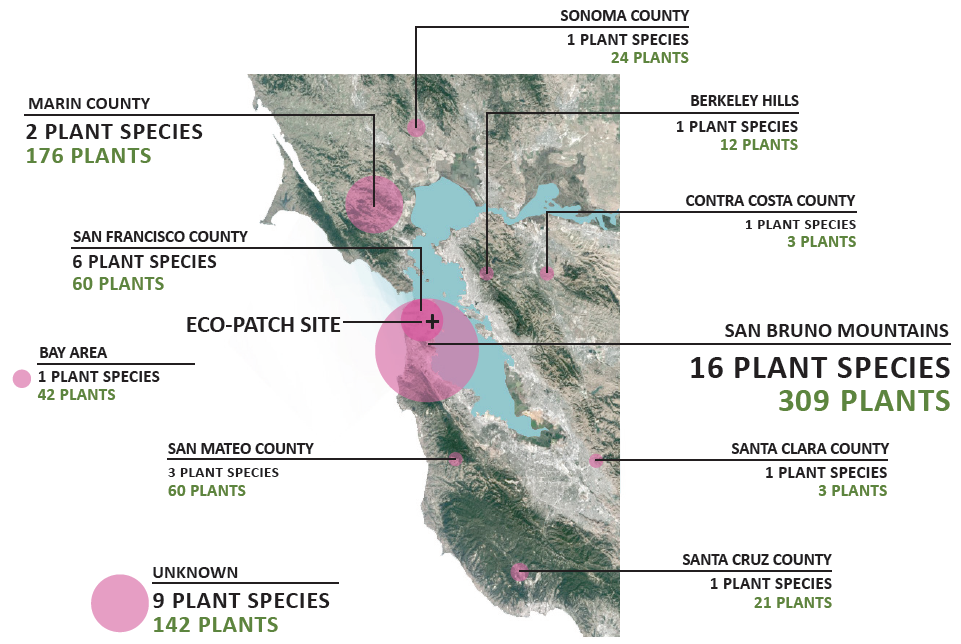 We hope to add an additional incentive for people to plant native by researching how regionally native plants can be combined into visually compelling and dynamic mixes through experimentation with plant layers, percentages and spacings. By sharing our findings, we aim to make it easy for gardeners and landscape industry professionals to use plants native to California and for their gardens to look beautiful from a traditional horticultural perspective. Initially, we will continue focusing on garden and sidewalk planting and as we begin working at a larger scale, we would like to experiment with the Swiss and German mixed perennial planting’s streamlined installation approach. In contrast to the modular planting layout we used for the test garden, their layouts are designed so that every plant has the same spacing and the species used is placed at random by the installer—due to extensive testing, this strategy consistently yields a successful result.

Moving forward, we see citizen science as an exciting potential partnership. Once the mixes are developed to a point where they are ready for further widespread testing, home gardeners can become partners in the experiment. For each plant mix home gardeners are trialing, they could log photos and maintenance activities to iNaturalist or a similar app, and help us build a library of data on the mixes in order to refine them and develop others.

We at Field Collective feel energized by the pursuit of mainstreaming ecologically functional native planting within California’s urban and suburban areas. We are encouraged by the growing movement of native plant activists and are optimistic this is the beginning of an ecological and horticultural revolution to improve biodiversity resilience. We are halfway through another challenging drought year, with more difficult years to come as the effects of climate change worsen, yet we remain hopeful. We are inspired by the passionate neighbors of Potrero Hill and overjoyed by the prospect of making a meaningful contribution to the industry and ecosystem.

Calscape (run by California Native Plant Society) is an incredibly in-depth database and tool for learning about plants native to California—invaluable for planning native gardens.

Tallamy, D. W. 2020. Nature’s Best Hope: a new approach to conservation that starts in your yard. Portland, OR: Timber Press.

Nurseries we worked with for our project: